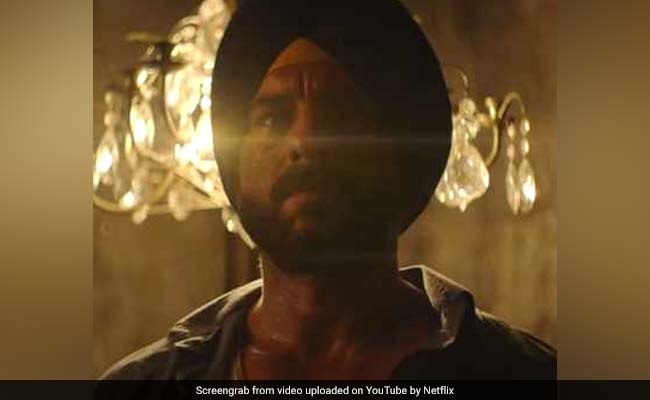 Saif Ali Khan, who features in Netflix series Sacred Games, said that he would produce something similar to his upcoming web series if given a chance, news agency IANS reported. Saif said: "Given an opportunity, I would have produced something exactly like this for a platform like Netflix." Saif Ali Khan will be seen playing cop Sartaj Singh in Netflix's Sacred Games, which premieres on July 6. Saif added that the kind of series he would make will not be the conventional love stories rather something more exciting like a "cop-mafia" series. "It would not be a family drama or a love story but a cop-mafia story set in Mumbai because I think such stories are really romantic. It is interesting to watch how the lack of opportunity that the poor suffer makes them develop their set of surviving strategy," IANS quoted Saif Ali Khan saying.

Sacred Games has been adapted from author Vikram Chanda's novel with the same title. The 47-year-old actor said that the series is not an exact adaptation since there are certain things which have been changed. "There are certain changes made because of the change of media from book to audio-visual. So, the screenplay is a little different. In the book, my character is quite passive and internal. That looks dull on-screen, so we made it little external," Saif told IANS. To prepare for his character, Saif said he read the book, which helped him understand his role better.


The first impressions of Sacred Games are positive. In his review for NDTV, film critic Saibal Chatterjee wrote: "This dark thriller, jointly directed by long-time collaborators Vikramaditya Motwane and Anurag Kashyap, has been filmed largely on real locations. It looks primed to be India's answer to Narcos - and then some. Thanks to the editing and the evocative background score, Sacred Games throbs with life as death and danger stalk the streets of Mumbai."

Radhika Apte and Nawazuddin Siddiqui also have significant roles in the eight-episode series. While Nawazuddin plays antagonist Ganesh Gaitonde, Radhika plays RAW agent Anjali Mathur. Of playing the role of criminal Gaitonde in Sacred Games, Nawazuddin Siddiqui told IANS: "The script was written with a lot of details and because the story told in eight episodes, which means an eight-hour show. As an actor, I got a chance to go close to the character. t has a much nuanced portrayal on-screen. It has not only given me a chance to go deeper into the character but also explore the possibility to work on a scene better."
Comments
Sacred Gamessacred games saif ali khan