Neha Dhupia Vs Angad Bedi: Can You Help Judge This Bicep Contest?

In a boomerang shared on Instagram Stories, Neha and Angad can be seen flexing their biceps 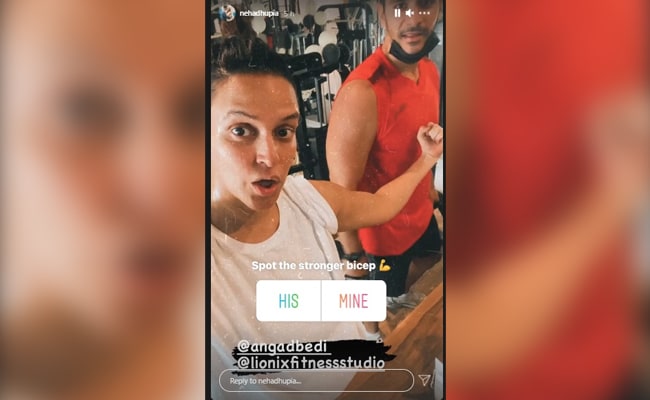 Neha Dhupia and Angad Bedi in a still from the video.(Image courtesy: nehadhupia )

What happens when Neha Dhupia and Angad Bedi go to the gym together? An inevitable contest. This time, the couple is asking for your participation. In a boomerang shared on Instagram Stories, Neha and Angad can be seen flexing their biceps. The actress ran a poll asking people to "spot the stronger bicep - his or mine?" While Neha is wearing a white tee, Angad can be seen dressed in a red gym tank and black shorts. So, who is your pick? 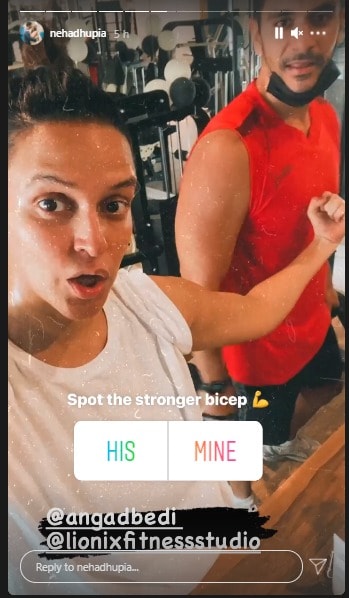 Both Neha and Angad have thousands of fans who look up to them for fitness inspiration. Angad is a gym enthusiast, who often performs high-intensity workouts to be in the best shape.

Neha, on the other hand, keeps her diet and fitness regime simple.

Here are a few snippets of the couple making us go green with envy with their beach bodies.

One of the most beloved couples of Bollywood, Neha and Angad got married in 2018. They welcomed their first child, Mehr, a few months after they tied the knot.

Angad's last movie outing was opposite Janhvi Kapoor in Gunjan Saxena: The Kargil Girl. The film, directed by Sharan Sharma, also stars Pankaj Tripathi and Riva Arora. It was released on the OTT platform Netflix.

Neha, on the other hand, will play the role of a cop for Behzad Khambata's A Thursday. She will be seen alongside Yami Gautam, who plays the lead role in the film. The movie also stars Dimple Kapadia in a crucial role.