Neha Dhupia and Angad Bedi had an ROFL conversation on Instagram 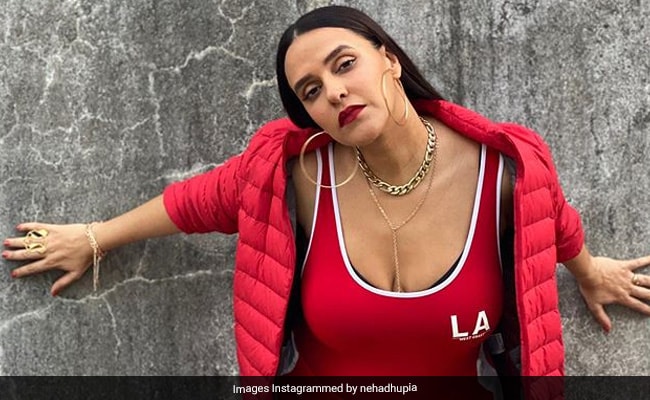 Neha Dhupia, busy with Roadies Revolution, shared her all-red look for the day on Instagram recently, prompting an ROFL comment from her husband Angad Bedi. Neha Dhupia, who styled a red tee with red pants and a red puffer jacket, shared a set of pictures with the red stop sign on Instagram. And all a clearly impressed Angad Bedi could write was: "Oh teri keee!" But Neha Dhupia's response to that comment is a winner. Using an inge'knee'ous pun, she wrote: "Oh teri kneeee," and laughed at her own joke as she added a few more emojis. Here's a glimpse of the ROFL conversation between Neha and Angad that went down on Instagram.

But first, a look at the photos shared by Neha Dhupia:

Neha Dhupia and Angad Bedi often trend for their adorable family photos and loved-up moments. The couple married in May 2018 and are parents to daughter Mehr, who celebrated her one-year birthday in November last year. Neha and Angad have carefully avoided sharing photos of Mehr on social media but the little one makes frequent appearances in the form of cute Instagram posts.

Merry Christmas from us to you ...

Neha Dhupia has been part of adventure reality show Roadies as the Main Leader since Roadies X4 in 2016. The auditions for Roadies Revolution has been wrapped and is yet to announce a premiere date. Rannvijay Singh will return as the host for Roadies. Neha Dhupia also hosts a talk show No Filter Neha. On the big screen, she was last seen in the 2018 movie Helicopter Eela. She will next be seen in short film Devi.