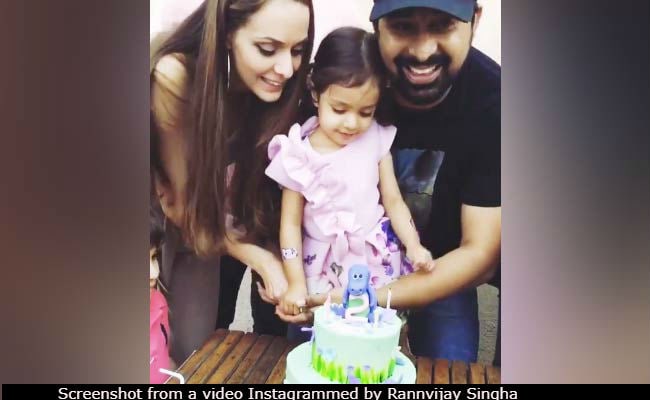 VJ-actor Rannvijay Singha and his wife Prianka hosted the second birthday bash of their daughter Kainaat at their Mumbai residence on Wednesday and invited their close pals and Kai's friends. Rannvijay posted a video from the cake cutting on his Instagram timeline and thanked everyone for their birthday wishes. "Thank you all for sending all the love and good wishes for Kainaat! Really appreciate your love," Rannvijay wrote. The video features the little one cutting her birthday cake with her parents by her side. Neha Dhupia, who features in television reality show Roadies as one of the gang leaders along with Rannvijay, shared glimpses from the fun-filled party on her Instagram stories. She checked in at the party with husband Angad Bedi. Soha Ali Khan, who is often photographed hanging out with Rannvijay and his wife, was also invited to the birthday party. Soha shared a photo featuring herself with husband Kunal Kemmu, Rannvijay, Prianka and Angad Bedi.

Here are inside photos from Kainaat's birthday party:

Thank you all for sending all the love and good wishes for @singhakainaat ! Really appreciate your love. #satnamwaheguru

Kareena Kapoor and Saif Ali Khan's son Taimur and Sunny Leone and husband Daniel Weber's daughter Nisha were also in attendance. Taimur, dressed in a blue tee and a pair of denims, was escorted by his nanny to the birthday venue. Nisha arrived with her father Daniel Weber and was smiles for the paparazzi.

Tim and Nisha are having fun #taimuralikhan

On Kainaat's birthday, Rannvijay had posted a heartfelt message for his daughter and treated his Instafam to an oh-so adorable picture. In the photo, Rannvijay can be seen replicating his daughter's cute expressions. "Meri jaan Kainaat, happy birthday! Seems like yesterday when I held you in my arms for the first time and just like that you are 2," Rannvijay captioned the picture.

Meri jaan @singhakainaat happy birthday! Seems like yesterday when I held you in my arms for the first time and just like that you are 2! #satnamwaheguru

On the work front, Rannvijay Singha is currently shooting for the 16th season of Roadies. He has not announced any Bollywood project as of now.