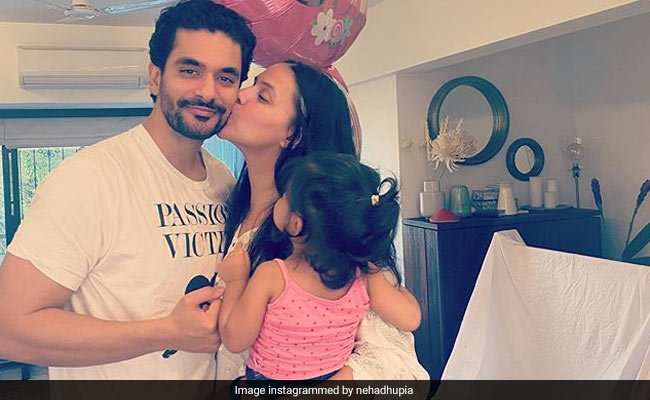 Neha Dhupia and Angad Bedi's posts featuring their daughter Mehr are oodles of cuteness. Mehr turned 19 months old on Thursday. Neha Dhupia celebrated it with a super cute picture of Mehr on her Instagram profile. In the picture, little Mehr can be seen looking away from the camera. Sharing the picture, Neha Dhupia accompanied it with an equally adorable caption: "Our baby girl... 19 months today... god bless you our little doll." Within minutes, Neha's picture was flooded with comments from her friends and fans. Reacting to the picture, Siddhant Chaturvedi and Gul Panag commented with heart icons. Take a look at the super cute picture of Mehr here:

In a separate post, Angad Bedi also shared a picture of himself with Mehr and wished her. In the picture, Angad Bedi can be seen kissing Mehr. "19 months today our attibaanu waheguru Mehr kare," wrote Angad. Neha Dhupia dropped the most adorable comment on his picture - "Uff my heart is melting," she wrote. Take a look:

Angad Bedi and Neha Dhupia keep treating their Instafam to cute pictures of themselves with Mehr. A few days ago, Neha Dhupia lit up Instagram with a sun-kissed picture of herself and Mehr. "Sun daze," Neha captioned the picture.

A glimpse of Neha and Mehr's art sessions. "Piece of (he)-art," wrote Neha Dhupia for Mehr.

Painting class with baby Mehr!!! Thank you @nehadhupia the Mrs for setting it up. #homesweethome

We are yet to get over this boomerang video of Angad Bedi with Mehr.

Our #attibaanoo @nehadhupia thank you not just for the boomerang but all wonderful things in life.. have a good day beautiful people of this world.

Angad was last seen in The Zoya Factor where he shared screen space with Dulquer Salmaan and Sonam Kapoor. He will next be seen in Gunjan Saxena: The Kargil Girl co-starring Janhvi Kapoor. On the other hand, Neha was last seen in Priyanka Banerjee's short film Devi where she shared screen space with Kajol, Shruti Haasan and Neena Kulkarni. She also features in MTV's reality show Roadies: Revolution as one of the gang leaders.