Neha Dhupia and Angad Bedi, who tied knot in May this year, will host a reception for friends and family in July 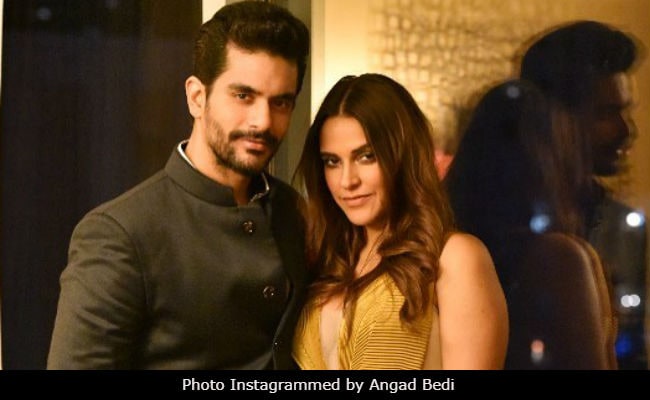 New Delhi: Post Neha Dhupia and Angad Bedi's hush-hush wedding in Delhi, a lavish reception may be hosted by the couple in July, stated mid-day. "We are hoping to host a reception in the first week of July. Shaadi toh kar li, but we have to go reverse now," mid-day quoted Angad Bedi saying. Angad said that getting his wife Neha to actually sit down and plan the event is a major challenge, reported mid-day. "She needs to give me five days to figure this out. We have seen a few venues and are yet to zero in on one," said Angad. Given his stint with cricket and films, one thing is for sure that Angad's guest list is going to be a long one. Neha, who has also been part of the industry for a while now, has a sizeable list of friends whom she hopes to invite to the reception.

"I want my close friends to be there. Right now, all of them are busy. (Ashish) Nehra is not in town. From the film industry, I want Mr Bachchan and Salman (Khan) bhai to be there, and they are both caught up right now," Angad Bedi told mid-day. Angad Bedi also told mid-day that they are in search of a new house and the celebrations will kick in as soon as they will purchase their new property.

Neha Dhupia and Angad Bedi's wedding was an intimate affair with family and close associates in attendance. The wedding took place at a gurudwara in Delhi on May 10 and the duo shared the big news with their fans on social media. About how things fell in place for the duo, Angad Bedi told mid-day: "One day, Neha and I were talking about life, and I told her I want to settle down with her. We've known each other for a while. I have been interested in her for a long time. I spoke to her parents. They loved me, especially her mother. We had the idea of having a winter wedding, but my dad said we should keep it small. Between the cricket and Bollywood industries, we should have a guest list of 2,000 people." Angad Bedi is the son of famous cricketer Bishan Singh Bedi.

Photos from Angad and Neha's wedding in Delhi:

Best decision of my life.. today, I married my best friend. Hello there, husband! @Imangadbedipic.twitter.com/a2ePsaXUNN

Promoted
Listen to the latest songs, only on JioSaavn.com
It was "now or never" situation for Angad and Neha since their work commitments would have them apart for over a year. "Neha is leaving for the US soon, and I am in between three projects. So, it was now or never for us," Angad added.

On the work front, Neha Dhupia was last seen in Tumhari Sulu and she currently features as one of the gang leaders on reality show Roadies Xtreme. She will next be seen in Eela starring Kajol and Lust Stories. Angad Bedi's last film was Tiger Zinda Hai and will be now seen in Soorma.