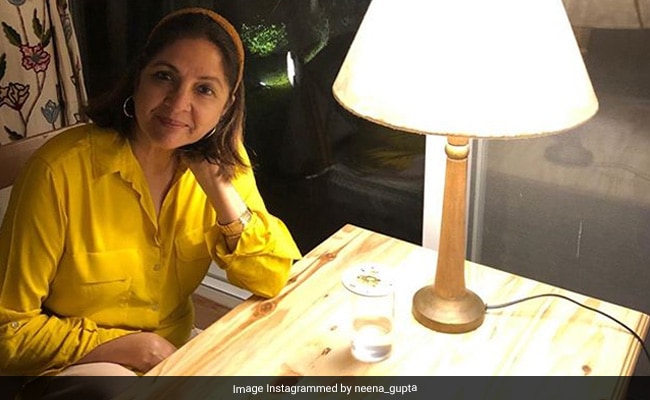 Just three months ago, Neena Gupta's new haircut picture went insanely viral on social media. And now, the actress is back to win the Internet again with her new look. Neena Gupta, on Thursday, shared a picture of herself on her social media profile and gave her fans a glimpse of her "new hairband look." In the photograph, the Shubh Mangal Zyada Saavdhan actress can be seen sporting a yellow shirt, cream-coloured trousers and an orange headband while happily posing for the camera. Sharing the photo, Neena Gupta kept her caption short and simple. She wrote: "My new hairband look."

Soon after Neena Gupta shared her picture, her Instafam flooded her post with comments such as "you can carry any look" and "you always look beautiful." One of the users wrote: "You look like a college girl" while another commented: "You look like a woman in her twenties."

Meanwhile, also check out the aforementioned photo of Neena Gupta that she shared after getting a bob cut.

Neena Gupta is keeping herself busy in the coronavirus lockdown by cooking, practicing yoga and giving hair cut to her husband Vivek Mehra. Take a look at the posts from her quarantine diaries here:

After making the beautiful film with me, The Last Color. Chef @vikaskhannagroup now teaches me the lemon cake! . . . . #masterchef #vikaskhanna #thelastcolor #baking #quarantine

On the work front, Neena Gupta was last seen in Shubh Mangal Zyada Saavdhan, in which she co-starred with Ayushmann Khurrana, Jitendra Kumar and Gajraj Rao. She has previously worked with Ayushmann and Gajraj Rao in Badhaai Ho. Neena Gupta has starred in a number of films like Aadat Se Majboor, Gandhi, Mandi, Utsav, Laila, Jaane Bhi Do Yaaron, Trikaal, Susman, Kaarnama, Khalnayak, Bhagavad Gita: Song Of The Lord, Woh Chokri, Veere Di Wedding and Panga. She will next be seen in a special appearance in Kabir Khan's '83, in which Ranveer Singh will be seen playing the lead role. The film will also feature Ranveer's actress wife Deepika Padukone.