The actress, as always, accompanied her post with a hilarious caption 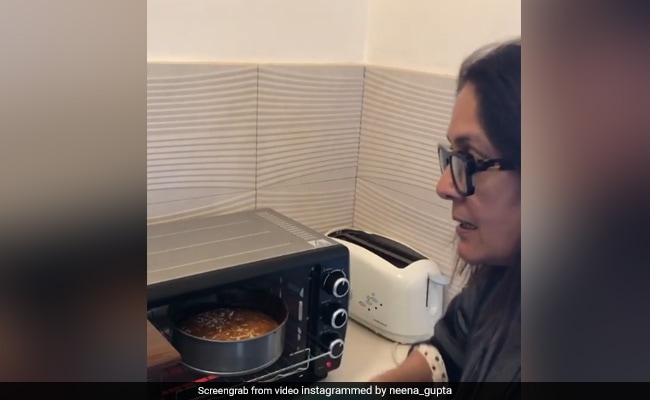 Neena Gupta in a still from the clip. (Image courtesy: Instagram)

Neena Gupta's latest entry on social media will make you drool, literally. The Shubh Mangal Zyada Savdhaan actress donned the chef's hat and baked a cake on Friday. Sharing a glimpse of her cooking session, Neena Gupta posted a clip on Instagram and we can't get enough of it. In the clip, Neena can be seen checking the consistency of the cake and taking it out from the oven for a better "close-up." Neena also mentioned that this is the second time that she has made an orange cake. The actress, as always, accompanied her post with a hilarious caption and wrote: "Desi ladki vilayati ho gayi hai ji." LOL.

Take a look at her video:

Neena Gupta is keeping herself busy during lockdown by not only cooking but also by giving haircut to her husband Vivek Mehra. In one of previous posts, she could be seen cutting Mr Mehra's hair like a pro. In case you haven't seen the picture yet, check it out now:

On the work front, Neena Gupta has featured in several films such as Aadat Se Majboor, Gandhi, Mandi, Utsav, Laila, Jaane Bhi Do Yaaron, Trikaal, Susman, Kaarnama, Khalnayak, Bhagavad Gita: Song Of The Lord, Woh Chokri, Veere Di Wedding, Badhaai Ho and Panga. She was last seen in Shubh Mangal Zyada Saavdhan. In the film, Neena Gupta co-starred with Ayushmann Khurrana, Jitendra Kumar and Gajraj Rao. She will next be seen in a special appearance in Kabir Khan's '83, in which Ranveer Singh will be seen playing the lead role. The film will also feature Ranveer's actress wife Deepika Padukone.