Directed by Neena Gupta, Siski aired on Star Plus in 2000 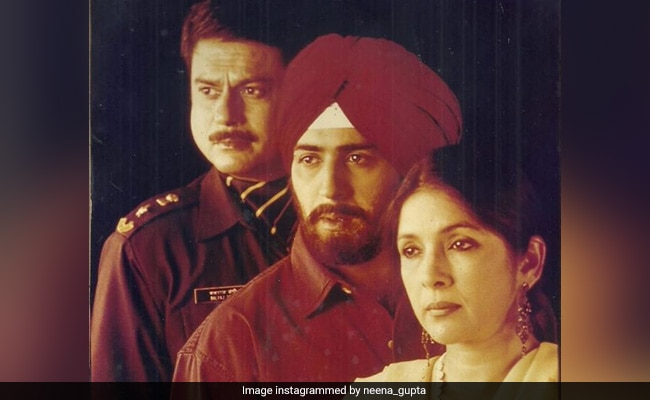 Neena Gupta is a champ when it comes to throwback games. Her latest post on Instagram proves it. The actress, on Wednesday, made a trip down memory lane and fished out a throwback picture from the sets of her TV series Siski. The photograph features not only Neena Gupta but also her co-stars Kanwaljit Singh and Sumeet Saigal. In the picture, Neena can be seen dressed in a traditional outfit while Kanwaljit Singh can be seen sporting an Army uniform. Sumeet Saigal can be seen wearing a turban and a shirt. Sharing the photo, Neena Gupta kept the caption short and simple. She wrote: "Kanwaljeet, Sumeet Saigal and me in Siski."

Directed by Neena Gupta, Siski aired on Star Plus in 2000. It also starred Manohar Singh and Adeela Sachdev. Other than Siski, Neena and Kanwaljit have also worked together in the 1998 television series Saans.

Neena Gupta frequently delights her fans by sharing priceless throwback pictures on her social media profile. In one of her previous posts, she shared a throwback picture with her Panchayat co-star Raghubir Yadav and hilariously wrote: "Jab pradhan aur pradhan patni jawan they. Raghubir aur main."

On the work front, Neena Gupta was last seen in Shubh Mangal Zyada Saavdhan, in which she co-starred with Ayushmann Khurrana, Jitendra Kumar and Gajraj Rao. She will next be seen in a special appearance in Kabir Khan's '83, in which Ranveer Singh will be seen playing the lead role.