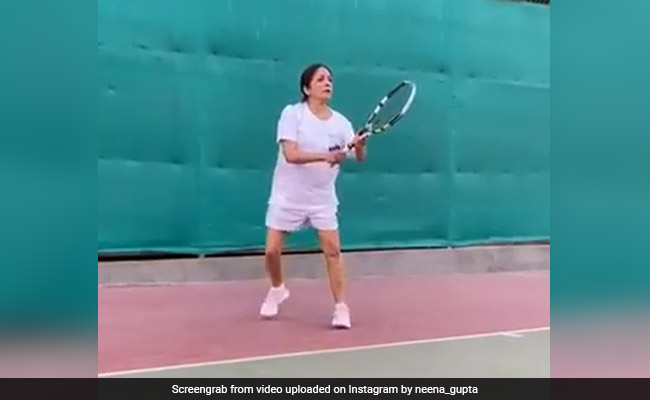 Neena Gupta in a still from the clip. (Image courtesy: neena_gupta)

If you have ever suffered cramps from playing after a long time, Neena Gupta's latest Instagram post will bring back those bittersweet memories. In case you are wondering why, the actress shared a video of herself playing tennis on Monday and what caught our attention was her ROFL caption, which will definitely leave you in splits. Sharing the video, in which she can be seen sporting a white sports t-shirt and shorts, Neena said that she played the game "after years" and felt good about it. However, it is her hilarious prediction about the condition of her body after the extensive exercise that is breaking the Internet. Neena wrote: "Played after years, feeling so good. Kal sab ouch hoga." LOL.

Take a look at Neena Gupta's post and her caption here:

Be it a general post or a throwback picture, Neena Gupta always accompanies her posts with witty captions. Remember her post in which she wrote about having her ID checked thrice? It was too funny. Neena shared a picture standing with her luggage at what appears to be an airport and wrote: "Jab teen baar ID dekha jata hai toh samajh mein aa jaata hai ki baby abhi tum famous aur successful nahin hue (when the ID is seen thrice then it is understood that you are not famous and successful yet).

Also check out her "no frock for some time" post:

Chalo no frock for sometime

On the work front, Neena Gupta was last seen in Shubh Mangal Zyada Saavdhan, in which she co-starred with Ayushmann Khurrana, Jitendra Kumar and Gajraj Rao. She will next be seen in a special appearance in Kabir Khan's '83, in which Ranveer Singh will be seen playing the lead role.