The actress was presented with the video on the sets of the reality show Super Dancer: Chapter 4. 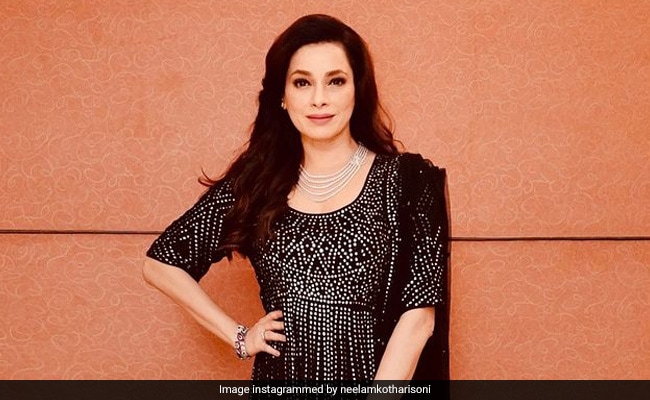 Neelam Kothari from the sets of Super Dancer 4 (courtesy neelamkotharisoni)

After a two-decade hiatus from the movies, actress Neelam Kothari reappeared on our screens last year with the Netflix original series Fabulous Lives of Bollywood Wives. Following an overwhelming response to the series, the actress made an appearance on the reality TV show, Super Dancer: Chapter 4. This outing was highly anticipated by fans as Neelam would be seen alongside actor Govinda, with whom she had delivered several hits during the 80s and 90s. As expected the duo created magic on stage by grooving to their song Aap Ke Aa Jane Se from the 1987 film Khudgarz.

This, however, was not the only moment that was special for the actress on the show. Neelam was also presented with a heartwarming video from her husband, actor Sameer Soni and their daughter Ahana. In the video that was later shared on Instagram by the couple, Sameer is heard saying, “Hi babe, How are you? I know you were as nervous as you were excited about this show. You were worried that you would fumble or miss a step; after all, you were facing the camera again after 20 years. But I am sure, once you are there everything will be fine,” to which Neelam is seen nodding and smiling in agreement.

Sameer further said, “Honestly when I saw you for the first time in the film Jawaani, I thought you were the cutest girl ever. That fact that you got married to me is the biggest compliment ever.”

“You are the biggest multi-tasker ever,” Sameer says, praising her ability to juggle work and family responsibilities seamlessly. “I feel bad that I cannot contribute as much. I love you,” he adds, to which Neelam gets emotional.

Ahana too says, “I hope you are having fun at Super Dancer watching people dance...At home, we all miss you and can't wait to hear all about it...we can't wait for you to come back.”

Sharing the adorable clip, Neelam wrote, “This was so special thank you babe,” tagging Sameer.

Govinda as well as judges Shilpa Shetty, Geeta Kapoor and Anurag Basu are seen clapping for Neelam at the end of the clip. Reacting to this, Bhavana Pandey, who appeared alongside Neelam in Fabulous Lives of Bollywood Wives, left heart emojis and several other fans followed suit.

Neelam made her debut with the film Jawaani in 1984. Two years later, Govinda made his debut in the film Ilzaam opposite Neelam. Following this, they worked together in films such as Khudgarz, Gharana, Love 86 and Sindoor, making them a hit jodi among film lovers.

Inside Neha Kakkar's Birthday Bash. See What She Wrote For Her "Prince Charming" - Husband Rohanpreet Singh