Navya Naveli's Reaction To Pic Of Shweta Bachchan Pregnant With Her 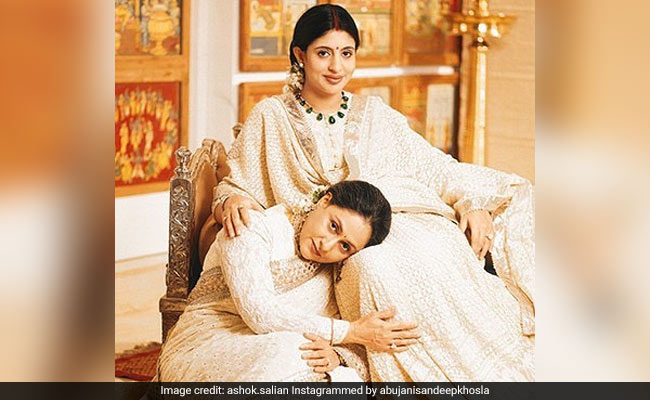 Shweta Bachchan Nanda featured in a throwback photo from 1997, courtesy designer duo Abu Jani and Sandeep Khosla, and she had to had bring it to her daughter Navya Naveli Nanda's attention. To celebrate 33 years of their couture, Abu Jani-Sandeep Khosla Instagrammed a photo from a Bachchan family function, from when Shweta was pregnant. The couturier duo, who styled Shweta's outfit, revealed Navya was born just days after: "This photograph was clicked four days before she gave birth to her daughter, Navya Naveli." Jaya Bachchan features with then mom-to-be Shweta in the photo, which garnered this reaction from Navya: "OMG!" Shweta responded to Navya's comment, saying: "Ya, four days later." 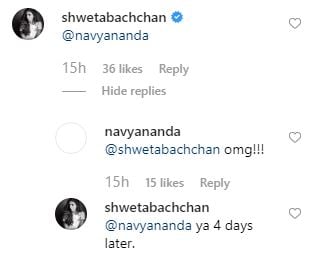 Abu Jani and Sandeep Khosla treated us to delightful glimpses of Shweta's wedding album. They were the official wedding designers for not just the bride but also for the Bachchan clan for Shweta's wedding.

1997: A heartfelt thank you to Mrs. Jaya Bachchan for sharing these pictures from Shweta and Nikhil's Sangeet with us. Their wedding was the first ever event done by Abu Jani Sandeep Khosla and the duo handled everything from decor to ensembles for each function for the entire Bachchan family. The Sangeet was an ode to Tradition at it's glorious best. And the ensembles a tribute to classical elegance and masterful craftsmanship. Shweta Bachchan wore a sumptuous gold brocade khinkhaab ghagra with gold zardozi vasli in a leafy tendril pattern. "It was a huge honour to have Mr and Mrs Bachchan entrust us with such an important occasion in the family. That they also gave us complete creative freedom was priceless. It allowed us to dream and execute to our hearts' content and bring to life an absolute fantasy" - Abu and Sandeep @shwetabachchan @bachchan @nikhil_nanda #33YearsOfAJSK . . . #abujanisandeepkhosla #abujani #sandeepkhosla #memorylane #journey #memories #milestones #anniversary #design #fashion #original #couture #always #classic #handmade #handembroidery #traditional #shwetabachchan #bridal #gold #brocade #khinkhaab #ghaghra #classical #traditional #zardozi #vasli #tendrilpattern #shwetabachchan #abhishekbachchan #nikhilnanda

1997: More from the spectacular wedding of Shweta Bachchan and Nikhil Nanda! "Jaya is like our sister and we are like Shweta's mamas. We've known her and Abhishek since they were in their early teens, so doing this wedding went beyond work for us and it will always hold a very special place in our hearts"Nikhil and his family were very close to us and our first interiors project was redecorating their home. So this wedding meant a lot to us. It was the first event we ever got to design from end to end. We had a great time. It was a fantastic creative and emotional experience!"- Abu & Sandeep The duo channeled their devotion to detail into every aspect of the fabulous arrangements. Both the couture and the decor reflected the magic of their maximalist philosophy. For the wedding ceremony, they created ensembles that were a celebration of regal grace and handcrafted embroideries. Shweta Bachchan wore a velvet ghagra and blouse in maroon. Tiny booties embroidered in resham, badla and crystals filled the lehenga. A French net dupatta with a floral border completed this deliciously romantic ensemble. And for the mother of the bride, Jaya Bachchan, an exquisite red bandhini ghagra sari with lavish floral zardozi embroidery. @shwetabachchan @nikhil_nanda @amitabhbachchan @bachchan #33YearsOfAJSK . . . #abujanisandeepkhosla #abujani #sandeepkhosla #memorylane #journey #memories #milestones #anniversary #traditional #bridal #red #velvet #ghaghra #maroon #blouse #resham #badla #crystals #frenchnet #bandhanighaghra #floral #zardozi #embroidery #jayabachchan #amitabhbachchan #shwetabachchan #abhishekbachchan #nikhilnanda

Navya also often features in her mother's Instagram feed. The mother-daughter duo recently made a trip to Japan when Shweta made postcard like entries on Instagram.

Navya Navya and Shah Rukh Khan's son Aryan Khan were classmates at Sevenoaks in Kent, England. She is reportedly continuing higher studies at New York's Fordham University. Whether Navya aspires to join Bollywood or not is still not known but in an episode of Koffee With Karan, Shweta Bachchan had said: "Just because she's related to some famous people doesn't mean she has what it takes."