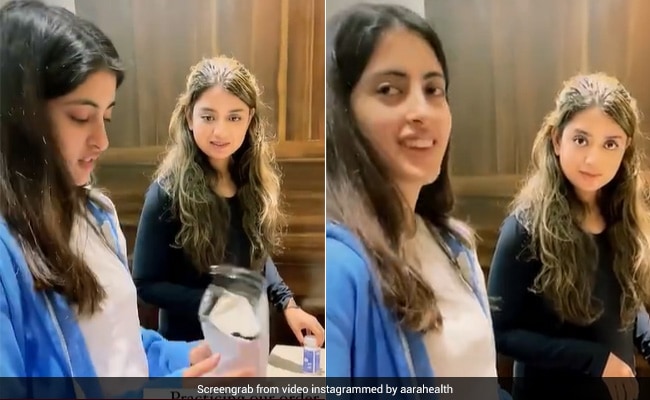 Navya in stills from her work video (courtesy aarahealth)

Work is keeping Navya Naveli Nanda rather busy, a glimpse of which was shared on Instagram recently. For those who do not know, Navya Naveli Nanda graduated from New York's Fordham University last year, after which she started an online healthcare portal called Aara Health, along with co-founder Mallika Sahney. On Tuesday, the founders of the healthcare portal were spotted prepping for their new venture in an Instagram video shared by Aara Health. Navya Naveli and Mallika Sahney can be seen trying their hands at packaging orders before the launch of Aara Wellness. "Practicing our order packaging! Aara Wellness is coming soon," said the video.

In the comments section, Navya's mother Shweta Bachchan Nanda gave a shout out to the young founders and wrote: "Onwards and upwards ladies."

Last week, Navya received a huge shout out from her grandfather Amitabh Bachchan on Twitter. Reacting to Navya's Instagram stories about being in conversation with Forbes India around the issue of mental health at work place, Amitabh Bachchan tweeted: "You make us so proud." Aara Health is dedicated to raise awareness about women's health.

Ahead of joining New York's Fordham University, Navya passed out from New York's Fordham University last year ahead of which she went to Sevenoaks School, London with Shah Rukh Khan's son Aaryan. After starting Aara Health, Navya has also launched her new venture -Project Naveli - which aims to empower women by addressing the issue of gender inequality in India. She even modelled for her mother Shweta Bachchan Nanda's designer label in collaboration with designer Monisha Jaising in the year 2018.