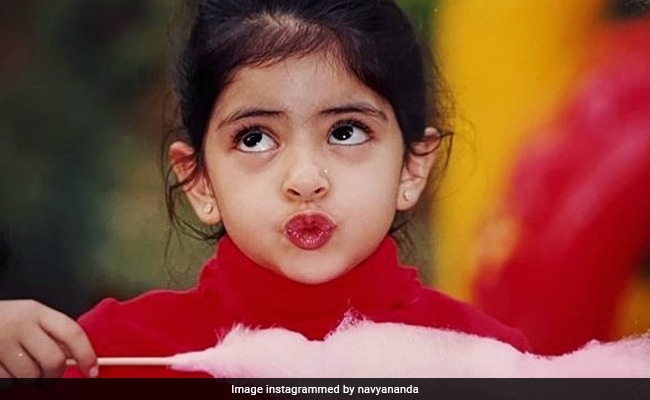 Navya Naveli Nanda has a thing for blast-from-the-past moments. What makes us say this? Her latest upload on Instagram. Navya looks too cute to handle in this throwback picture. She is wearing a tomato red sweater.  Don't miss that lip shade, please. That million-dollar expression on her face steals the show. Is it just us or did you also get mini poo vibes? The entrepreneur has claimed that she is “sweet as sugar” in the caption. And, we completely agree. But her mother Shweta Bachchan has something else to say. She called it, “Drama. Drama. Drama”.  Navya's uncle, actor Abhishek Bachchan has a question, “What about photo credit?” Navya, known for her comebacks, said, “I forgot. Where did you find this?”

Director Zoya Akhtar and Maheep Kapoor dropped faces with heart eyes, and a couple of heart emojis in the comment section.

Now, look at Navya Naveli Nanda - the “mini Shrek”. This was her caption too. In the picture, she is striking a cool pose in front of a banner. And, we can safely say that it features Shrek, an ogre.

Navya Naveli Nanda shares a special bond with her sibling Agastya Nanda. To mark her little brother's 21st birthday, Navya mined into her photo gallery and pulled out a beautiful moment from their childhood days. Along with the frame, which was clicked during Christmas festivities, Navya wrote, “21 years of you bursting into my room, staring at me in silence & then leaving.”

Navya Naveli Nanda, the granddaughter of Amitabh Bachchan and Jaya Bachchan, is the founder of Project Naveli and the co-owner of Aara Health. On the other hand, Agastya is all set to make his acting debut with Zoya Akhtar's The Archies alongside Suhana Khan and Khushi Kapoor.