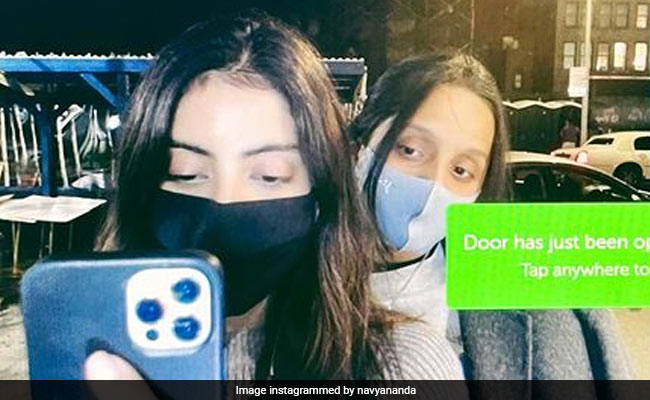 Navya Naveli Nanda, granddaughter of Amitabh Bachchan, lives in New York and often shares glimpses of her life in NYC on social media. Navya recently shared a glimpse of her adventure diaries on Instagram - roping in her friend Mahek Joshi for an ROFL photo, Navta wrote: "Spy kids." The reason for Navya's caption is well explained in the very spy-like elements of the photo - both Navya and her friend can be seen wearing face masks (as a precaution for COVID-19), which, we all know, is an old school trait of spies. There's also this notification on the screen: "Door has just been opened remotely" - Navya appears to have remote access to her apartment door via ButterflyMX, which enables the user to manage security from one's phone.

New York, watch out for the new "spy kids" in town:

Meanwhile, there are more such glimpses of Navya Nanda and her friend Mehek Joshi's New York shenanigans on Instagram. Here are just a few of them:

Navya, who is Amitabh Bachchan's granddaughter, graduated after from New York's Fordham University last year. She passed out from New York's Fordham University last year ahead of which she went to Sevenoaks School, London with Shah Rukh Khan's son Aaryan. After her graduation last year, Navya started an online healthcare portal called Aara Health. Navya has also launched her new venture -Project Naveli - which aims to empower women by addressing the issue of gender inequality in India. She even modelled for her mother Shweta Bachchan Nanda's designer label in collaboration with designer Monisha Jaising in the year 2018.