A fan tagged American rapper Cardi B and commented, "You must see this..." 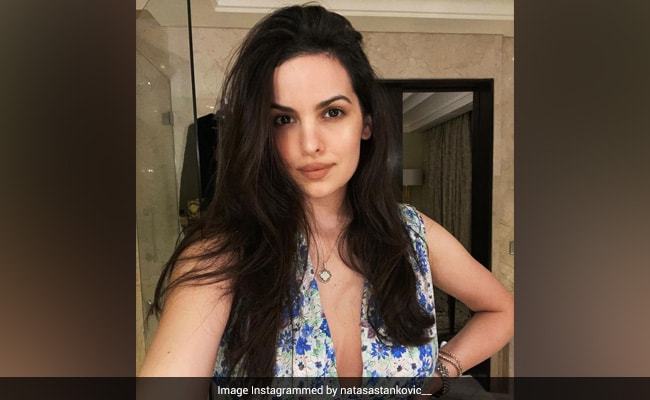 Actress-model Natasa Stankovic is setting the Internet on fire with her brand-new video on Instagram. On Wednesday evening, Natasa posted a clip on the platform in which she can be seen dancing to American rapper Cardi B's song Up. She is dancing on the street against the backdrop of trees. Natasa's outstanding moves are a treat to her Instafam. She put up a boom emoji in her caption. Natasa's video has garnered more than 32,000 likes so far. We are guessing Natasa's husband and cricketer Hardik Pandya recorded this clip.

Many Instagram users reacted to her video. A lot of her fans dropped red heart emojis. An Instagram user wrote, "Watching on loop." Another user commented, "So nice." What caught our attention the most is a comment by her fan. The fan tagged Cardi B and wrote, "You must see this...We are having great dancer like you in India too (sic)."

Recently, Natasa was featured in her husband Hardik Pandya's video on his Instagram handle. The clip also featured Hardik's brother Krunal Pandya along with his wife Pankhuri Sharma. Hardik, Natasa, Krunal and Pankhuri were seen shaking a leg on the song Ay Rico Rico. All of them wore emoji T-shirts. While both Hardik and Krunal were sporting orange T-shirts, Natasa and Pankhuri wore a black T-shirt and light blue T-shirt respectively.

In his caption, Hardik wrote, "The Drew Crew."

Natasa posted a picture of their group on her Instagram handle. In the photo, Natasa can be seen posing with Hardik, Krunal and Pankhuri. The picture was probably clicked at the same time when they recorded their dance video. Natasa wrote, "The Pandya's swag."

Natasa frequently posts her dance videos on Instagram. Take a look at a few of them here:

Natasa Stankovic got engaged to Hardik Pandya in January 2020. She married Hardik amid the coronavirus pandemic last year. The couple welcomed their son Agastya in July 2020.

Apart from being an actress, Natasa is a Serbian dancer. She made her Bollywood debut in Prakash Jha's 2013 film Satyagraha in which she appeared in the song Aiyo Ji. In 2014, Natasa was seen in Bigg Boss, a reality TV show. She also appeared in a song titled Mehbooba from the film Fukrey Returns. Natasa has also worked in films such as 7 Hours to Go and Zero.

She made her digital debut in 2019 web series titled The Holiday, which featured Adah Sharma in lead role.