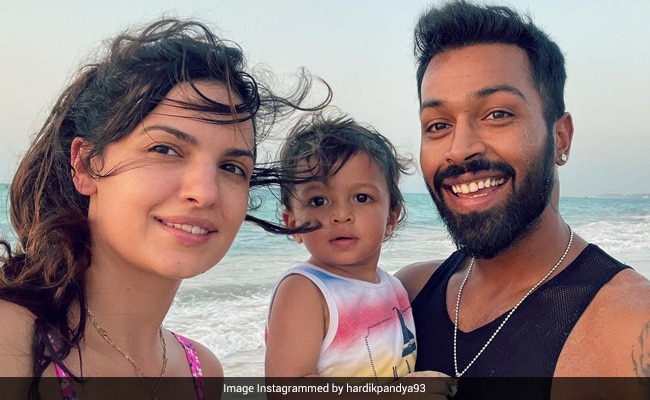 Model Natasa Stankovic and cricket Hardik Pandya, on Thursday, shared glimpses of their play date with their baby son Agastya on the beach. The couple, who got engaged last year, welcomed their baby son in July last year. On their respective Instagram profiles, Natasa and Hardik posted adorable pictures of themselves playing with their child on the beach in Abu Dhabi. Natasa Stankovic looks stunning in a pink and black outfit while Hardik can be seen sporting a black tee and shorts in the photos. Their son Agastya looks cute as a button in a rainbow-print top and shorts. Natasa captioned the photos with a world and a red heart icon while Hardik wrote "my babies" in his caption.

Hardik Pandya proposed to Natasa Stankovic in a very filmy way last year. He asked her to marry him on a yacht and in the middle of the sea. He announced the engagement on Instagram by borrowing lyrics from the song Jaanu Meri Jaan from the 1980 movie Shaan: "Mai tera, Tu meri jaane, saara Hindustan. 01.01.2020. Engaged." Natasa made the announcement by sharing a video of when Hardik Pandya went down on his knees to pop the question and captioning it: "Forever, yes!"

Natasa Stankovic, a former model, has featured in special dance numbers in films such as Satyagraha, Daddy, Fukrey Returns and Lupt, to name a few. She also starred in Swara Bhasker's web show Flesh and the dance reality show Nach Baliye 9, in which she participated with her ex-boyfriend Aly Goni, who was a contestant in the no-concluded reality show Bigg Boss 14.

Sushmita Sen Shares Special Post On Her 47th Birthday: "The Most Incredible Year Is On Its Way"