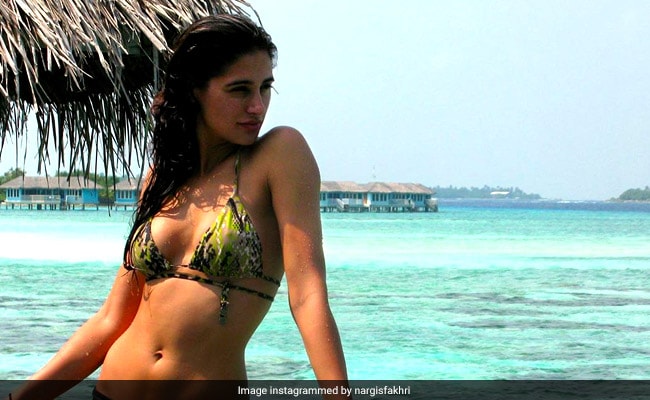 Nargis Fakhri, in a throwback kind of a mood, browsed through the pages of her holiday albums and zeroed in on a stunning photo of hers from Maldives to share with her Instafam. In her post, the 40-year-old actress made a confession of sorts - that she's craving another vacation - and wrote: "I need a vacation!" It appears one can soon expect Nargis to take-off for destination holiday because she is now day-dreaming about new vacay destinations: "Dreaming of a new destination to see. What's your favourite place in the world?" she wrote. In the photo, Nargis sports a black and lime green bikini as she can be seen soaking up the Maldives sun on the balcony of at a water-hut. Actress Ileana D'Cruz was one of the first ones to be impressed by Nargis' pic: "Daaayyyuummmm girl!" she wrote in the comments while Nagis' Instafam emptied their stash of the fire emojis.

I need a vacation! Dreaming of a new destination to see. #travel #jetset #throwback What's your favorite place in the world??

Earlier this year, Nargis Fakhri wrote a lengthy post about losing the extra weight she gained over two years. While her post appears to have been removed, here's what she wrote about getting back in shape: "Living life in the public eye can be very difficult sometimes. As much as it is a blessing, it also comes with its downside. Over the last 2 years, I've gained weight...I have since lost 20 lbs through making lifestyle changes. If I can do it, so can you."

Nargis Fakhri made her Bollywood debut with 2011 film Rockstar and has also featured in films like Main Tera Hero and Azhar. In 2016, Nargis Fakhri abruptly left Mumbai after filming Housefull 3 and did not return to promote the film, fanning rumours of a speculated split with actor Uday Chopra. Months later in her Instagram posts, Nargis Fakhri revealed she's dating American filmmaker Matt Alonzo. Nargis Fakhri was last seen in Amavas and next up she has Torbaaz lined for release, co-starring Sanjay Dutt and Rahul Dev.