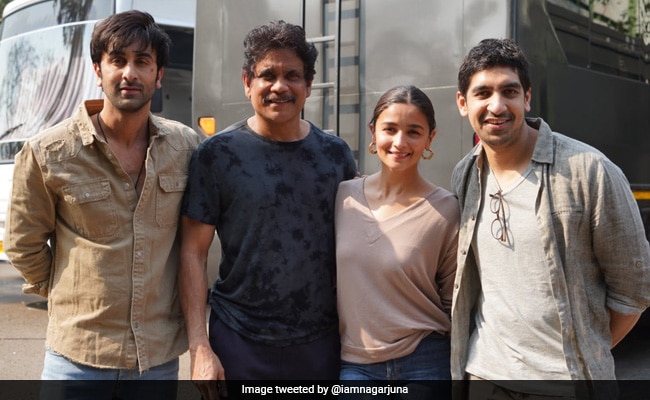 South star Nagarjuna wrapped the shoot of his work-in-progress film Brahmastra on Tuesday with a special note for his co-stars Alia Bhatt and Ranbir Kapoor. Brahmastra, directed by Ayan Mukerji, also features Amitabh Bachchan. On his official Twitter account, Nagarjuna posted two photos of himself with Alia Bhatt, Ranbir Kapoor and Ayan Mukerji posing on the sets of the film in Mumbai and wrote: "And it's a wrap for me on #Brahmastra. Such an amazing experience it has been with our stellar performers #Ranbir and Alia Bhatt. Can't wait for you guys to witness the outstanding world #AyanMukerji has created. #TheBigIndianMovie #Brahmastra."

And it's a wrap for me on #Brahmastra . Such an amazing experience it has been with our stellar performers #Ranbir and @Aliaa08. Can't wait for you guys to witness the outstanding world #AyanMukerji has created.#TheBigIndianMovie#Brahmastrapic.twitter.com/CvKBAVphnt

Alia Bhatt too posted similar pictures from the sets of Brahmastra and shared her experience of working with Nagarjuna like this: "And that's a wrap for Nagarjuna Sir on BRAHMASTRA! Thank you for the memories sir... such an honour to work with you. With the end of shoot so near.. can't help but look back on what a journey it has been so far on the film.. and the excitement of what lies ahead is another journey ALL TOGETHER."

Brahmastra is a fantasy trilogy. The film has been produced by Karan Johar's Dharma Productions.

Meanwhile, check out some more pictures and videos of Alia, Ranbir and Big B from the sets of the film.

Brahmastra will release in Hindi, Tamil, Telugu, Malayalam and Kannada.