Nafisa Ali On Working With Amitabh Bachchan After 24 Years 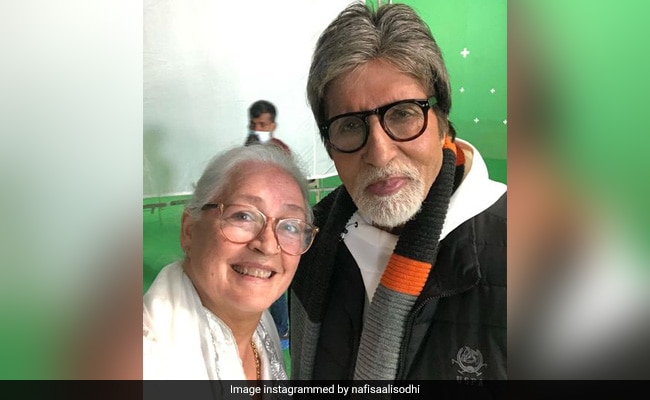 Bollywood cinephiles have a treat in store with  veteran actress Nafisa Ali joining the cast of the upcoming film Uunchai. The new directorial venture by director Sooraj Barjatya will have Parineeti Chopra in the lead role along with Nafisa Ali, Amitabh Bachchan, Neena Gupta, Anupam Kher, and Boman Irani as pivotal characters. However, what's really interesting for fans is that Nafisa Ali will be sharing screen space with actor Amitabh Bachchan after the 1998 film Major Saab. The actress got nostalgic and shared that she is thrilled about shooting with the megastar again. She recently shared a black and white picture on Instagram that features herself and Amitabh Bachchan.

In the picture, we can see the two actors smiling while posing for the camera. Nafisa Ali went down memory lane and wrote in the caption, “Memories of Major Saab and the present for Uunchai.”

Nafisa Ali posted a couple of pictures more with Amitabh Bachchan, Anupam Kher, and Boman Irani and her friend Kiran Nair who was with her while she was shooting for Major Saab. Looks like the candid picture was taken when they all were having a delightful conversation with each other. She captioned the images stating, “Watching the greats - my friend Kiran Nair (a retired army officer) is here with me in Mumbai and was with me during the shooting of ‘Major Saabh' as well. Love the feeling.”

Some days ago, Nafisa Ali yet again posted a slew of pictures with Amitabh Bachchan, Anupam Kher, and Boman Irani. In a detailed caption, she expressed, “Mumbai -At Mehboob Studio - 24 years later after Major Saab feels great working together again.” She further continued saying that the set is constructed at Mehboob Studios in Bandra, Mumbai. Further, she wrote, “This also marks Sooraj and Amitabh's reunion after a span of 48 years. The duo last worked together in the 1973 film Saudagar. Amazing energy with so many genius actors on set. Sooraj is a wonderful and sensitive director. I am so excited being a part of this film Uunchai .”

Nafisa Ali has acted in various Bollywood movies including Bewafaa and Life In A Metro.