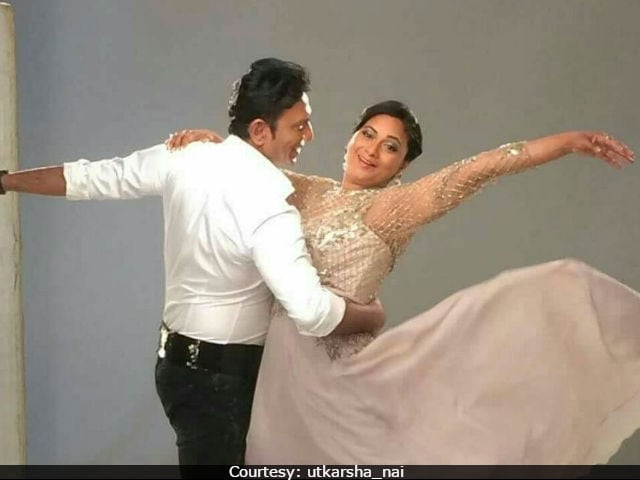 Utkarsha Naik And Manoj Verma on the sets of Nach Baliye 8 (Courtesy: utkarsha_naik)

New Delhi: Television actress Utkarsha Naik and her husband Manoj Verma were the first couple to get eliminated from the dance reality show Nach Baliye 8. Thought the couple received good reviews for their performance, they couldn't manage to continue with their stint, as they got less number of votes. Aashka Goradia, Brent Goble and Sanaya Irani, Mohit Sehgal's dhamakedaar performances were the main highlights of the show. Over the weekend, Hrithik Roshan made an appearance on Nach Baliye 8 as a guest. He grooved to songs like Kaho Naa Pyaar Hai and Saree Ke Fall Sa, with the contestants and Sonakshi Sinha. Bigg Boss 10 contestant Monalisa and her husband Vikrant Singh Rajpoot also joined Utkarsha and Manoj in the elimination process.

Sanaya and Mohit, who had scored the least in last week's episode, after the actor forgot his steps mid-way during the performance, were declared the toppers. Dipika Kakar and Shoaib Ibrahim continued to win praises for their dance.

Actress Udita Goswami, who is director Mohit Suri's wife, also made an appearance on the show. The couple together danced to Salman Khan's hit song Chunri Chunri from Biwi No. 1.

Here are some of the highlights of the show in pics:

@Regrann from @truptiakkalwar - Ths tm it was a Pinga ga pori Pinga with Bollywoods hottest man "Hritik Roshan". Fun# full to damal n masti. With Siddharth Jadhav in new avatar:) Plz do watch it tmrw @8am on Star Plus- Nach Baliye. Do vote us by just a miss cl on 18008432210 inbetween Sat 9pm to Sun 9am. #Regrann

Promoted
Listen to the latest songs, only on JioSaavn.com
Nach Baliye 8 is judged by Sonakshi Sinha, Mohit Suri and Terence Lewis.