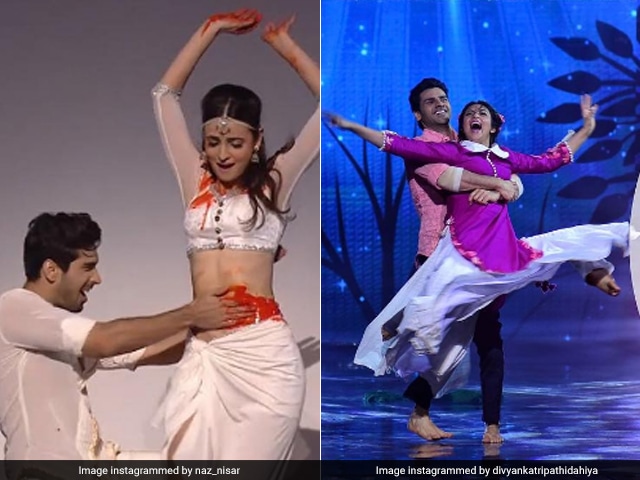 Nach Baliye 8: The celebs in stills from the show (courtesy

New Delhi: Celebrity couple Sanaya Irani and husband Mohit Sehgal were the toppers of last week's episodes of Nach Baliye 8. Keeping up with the expectations, the couple delivered a stunning and sensual performance on Saturday, in which they smeared colours on each other. Dressed in white, the couple danced to Adnan Sami's popular track Bheegi Bheegi Raat. Sanaya Irani, who shared a glimpse of their performance on Instagram, also appealed for votes: "Hope you guys enjoyed the act and if you did please show your love by voting for us." Their performance was applauded by the audience and the judges alike with Terence Lewis highlighting that the couple carefully refrained from going over-the-top with their act.

Hope u guys enjoyed the act and if u did please show ur love by voting for us . To vote please give a miss call on 18008432202. Voting lines are open till 9 AM #NachBaliye8 @starplus

Meanwhile, TV star Divyanka Tripathi was back on stage after missing the show for a week because of her injury. Divyanka and Vivek Dahiya delivered a blockbuster act, which was inspired by Kamal Haasan's 1983 film Sadma. Last week, Vivek Dahiya was spotted performing alone as Divyanka was advised complete bed rest owing to her severe back pain.

Meanwhile, Ashka Goradia and fiance Brent set the stage on fire as they performed a salsa act to the very desi Chammaak Challo. They were responded to with encouraging comments from the judges and loud hoots and cheers from the audience.

Actress Sonakshi Sinha and director Mohit Suri joins choreographer Terence Lewis on the judge's panel. However, Sonakshi was replaced by Malaika Arora for Saturday's episode and will be back on the show soon.