Nach Baliye 8: Divyanka Tripathi And Vivek Dahiya Are All Set For The Show 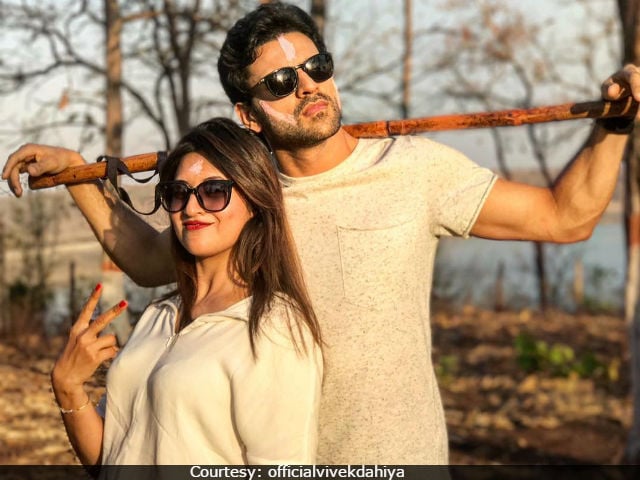 New Delhi: Television actors Divyanka Tripathi Dahiya and Vivek Dahiya, Sanaya Irani and Mohit Sehgal are all set to partipate in the eight season of the celebrity couple dance reality show Nach Baliye. Vivek, who features in Kavach... Kaali Shaktiyon Se shared a picture on Instagram with his baliye Divyanka from the sets of the show and captioned it as, "Because when something happens, she's the one I want to tell." The 32-year-old actor is constantly updating his fans with videos from the practice session. A week ago, Divyanka and Vivek through a video told us that they are ready to be a part of Nach Baliye 8 and are set to do 'romance wala dance.' Divyanka and Vivek Dahiya, who married in July 2016, are television's top-rated stars. They together star in Yeh Hai Mohabbatein, in which Divyanka is the leading lady.

Check out what you favourite couple Mr and Mrs Dahiya are up to:

Because when something happens, she's the one I want to tell #NachBaliye8

A post shared by Divyanka Tripathi Dahiya (@divyankatripathidahiya) on Mar 11, 2017 at 12:23am PST

Meanwhile, actor couple Sanaya Irani and Mohit Sehgal teased their fans with a picture from the practice session, where Sanaya writes, "And it begins.... need your love as we go on a very exciting but hard journey. #nachbaliye8 lets do this (sic)"

And it begins.... need your love as we go on a very exciting but hard journey. #nachbaliye8 lets do this

Sanaya Irani married her Miley Jab Hum Tum co-star Mohit Sehgal in January last year. Few days back, the couple did a photoshoot for the show, confirming their participation.

Trying to dance or trying to pose we have no idea , but man do we look good together . Get ready guys for Nach Baliye 8 #NachBaliye8 @starplus

Other couples who are participating in Nach Baliye 8 are:

It's time to gear up for the sizzling chemistry & romance-wala dance #staytuned & watch #nachbaliye8 from 2nd April, Sat-Sun at 8pm @shoaib2087

Aashka Goradia and her fiancee Brent.

@ruelhiphop @salsasneha Thank you for being our Gurus on this journey #nachbaliye #nachbaliye8 #letsdance #teammates @repostapp Nach Baliye Season 8, here we come!! @ruelhiphop & Me are very excited to be @aashkagoradia & @ibrentgoble choreographers this season!! It's going to be such an amazing and fun journey, I can feel it already.. We Winning this guys #nachbaliye8 #hardwork #couplegoals #tumerimaintera #friends #family #love #dance #journey #itsgoingtobeamazing

Promoted
Listen to the latest songs, only on JioSaavn.com
Former Bigg Boss contestant Pritam Singh and his wife Amanjjot Siingh.

The first episode of Nach Baliye 8 will be aired on television on Saturday, April 1. It would be judged by actress Sonakshi Sinha, choreographer Terrence Lewis and filmmaker Mohit Suri. The dance reality show will be hosted by actor Karan Tacker.

Koffee With Karan 5 Recap: 10 Best Moments, From Kangana To Ranbir Vs Ranveer