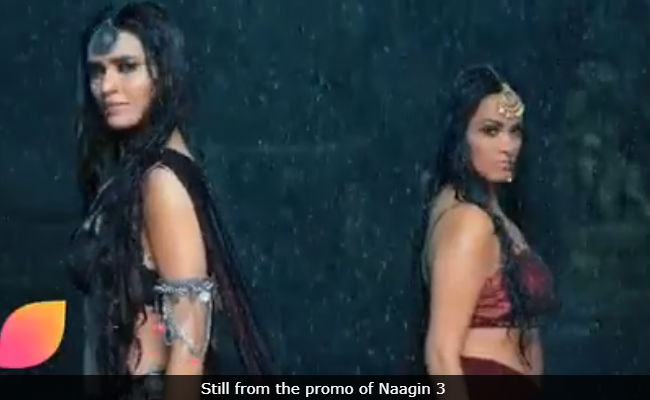 New Delhi: Team Naagin 3 launched a new promo of their upcoming show at an event in Mumbai... but this story is about the promo itself. The new promo sort of confirms that Karishma Tanna and Anita Hassanandani share their onscreen characters. In the third season of Ekta Kapoor's popular show, Karishma plays a revenge-seeking shape-shifting naagin, who can also change her human appearance - she transforms into Anita Hassanandani. Karishma's character is seeking revenge from the men who assaulted her after killing the love of her life, a shape-shifting nag played by Rajat Tokas. Anita and Karishma's character will be negative while Surbhi Jyoti, also the show's protagonist, has a positive role in the series.

The promo still doesn't introduce Surbhi Jyoti's character or her story in the show. Fans hoped that this teaser would give a glimpse of the Qubool Hai actress but they'll have to wait. Comments on the lines of "I want to see Surbhi Jyoti" were in plenty.

Watch the latest promo of Naagin 3:

Promoted
Listen to the latest songs, only on JioSaavn.com
The first two seasons of Naagin were headlined by Mouni Roy. Some Instagram users are hopeful of Mouni's return as season 2 ended with a mega-cliffhanger - Mouni's character was killed by her husband, played by Karanvir Bohra. However, fans are hopeful that of her return. Comments on the promo post prove that fans of the series loved Mouni Roy, whose character was killed in the finale of Naagin 2. "Ekta Kapoor, how will we relate to season 3... the mystery behind the death of Shivangi by Rocky and the entry of Ritik?" wrote one Instagram user.

Naagin 3 is a new story and it also stars Rakshanda Khan, Chetan Hansraj and Pearl V Puri. The show will air from the first week of June.