Murder At Teesri Manzil 302: Do yourself - and Irrfan's memory - a favour. Pick any other film from actor's varied and substantial oeuvre and watch it. 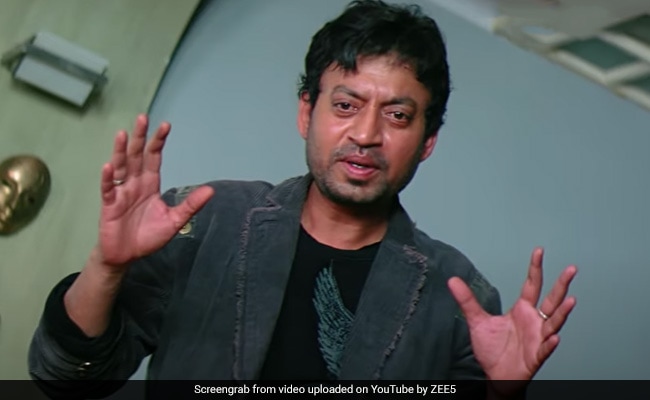 Irrfan Khan in a still from the film. (courtesy: YouTube)

Everything about Murder At Teesri Manzil 302, a long-delayed Irrfan Khan starrer that Zee5 has found space for, has obsolescence emblazoned all across it. But for the lead actor, whose admirers are legion and who will always be missed, the film has little that could explain why it has been retrieved from cold storage - it was scheduled for release all of a decade ago as Bangkok Blues - and foisted upon us. Murder at Teesri Manzil 302 is dead on arrival.

Irrfan's presence in the film, besides inducing an inevitable twinge, reminds us, if a reminder were at all needed, of the enormity of the loss that his absence represents. Even in the sloppiest of scenes in a puerile and messy suspense thriller, the actor does not lose his poise and finds ways to pull away from the mediocrity swirling around him.

The film is dedicated to both Irrfan and music composer Wajid Khan, one half of the Sajid-Wajid duo who died in 2020 two months after the much-loved actor. Unfortunately, Murder at Teesri Manzil 302 is too stodgy a film to be regarded as a fitting remembrance. Murder At Teesri Manzil 302 is, as the unwieldy title suggests, a murder mystery. It quickly murders any potential of developing into a passably engaging whodunnit. Any mystery that remains pertains to the star of The Namesake, Life... in a Metro and Paan Singh Tomar. What would have made him acquiesce to be a part of a movie such as this?

"It is like a blind date," Irrfan's character in the film says in a scene. We would have given it a miss had he not been involved. The terribly underwritten character that he plays spouts lines like "Bandhi hui aurat kitni khubsoorat lagti hai na?" The rough translation of the line would be, doesn't a woman in shackles look beautiful? We know exactly what to do with that question and, one can safely presume, so did the actor. Irrfan's bafflement shows on the screen.

Directed by Navneet Baj Saini, Murder At Teesri Manzil 302 unfolds primarily in two adjoining apartments in a Bangkok building block inhabited by Indians and where everybody speaks Hindi. In fact, the film would have us believe that everybody in the Thai capital uses our rashtra bhasha as a means of verbal communication.

Wonder why they all had to go all the way to Thailand to make a film that could have been rustled up in Mumbai itself without the script being altered one bit. Mumbai's local trains could have easily stood in for Bangkok's BTS. The streets and sights of Thailand do not even provide a meaningful backdrop for the story.

The story? Well, that is another story. The disjointed screenplay meanders merrily between the banal and the contrived without striving for any kind of believable psychological underpinning. Lies, subterfuge, betrayals, greed, violence: Murder At Teesri Manzil 302 is an ungainly pile-up of the usual suspense thriller tropes trotted out without a semblance of sense.

Maya (Deepal Shaw), the wife of a leading Bangkok industrialist Abhishek Diwan (Ranvir Shorey, who, too, is barely able to disguise a permanent befuddled look) goes missing. Two cops (Lucky Ali and Nausheen Ali Sardar, neither of whom is particularly active as actors anymore) are deployed to find out where on earth the lady has disappeared.

The plainclothes duo vanishes from the scene once they have done their token groundwork. They surface infrequently to register their presence in a film in which they are redundant. The police in Murder At Teesri Manzil 302 are compelled to take a backseat as the cat-and-mouse game turns to a battle of wits between the kidnapped and kidnapper. Neither the battle nor the wits on display is even half decent.

Turns out that Shekhar Sharma (Irrfan), a small-time go-to man for Indians in trouble in Bangkok (yes, that is his full-time occupation), has a hand in the woman's disappearance. There is an extra-marital affair, a secret deal and a murdered woman in here - the how and why of it add up to a insufferably laboured and completely unconvincing affair.

The remainder of Murder At Teesri Manzil is devoted to revealing how a man who claims to have a solution for every problem is embroiled in the messed-up lives of a wealthy and wicked entrepreneur and his wily wife. The two-hour film flits back and forth between a half-baked conspiracy and an unsuspecting man caught in the muddle that it sparks.

It is sad to see the incredible Irrfan Khan trapped in a script that does not possess the wherewithal to do justice to his talent. It is left entirely to the actor to make the most of a lousy deal - a job that he does without breaking a sweat.

Ranvir Shorey shows sparks of brilliance only to the extent that the insipid screenplay will allow him to, which, as you would have guessed by now, isn't much to write home about. Deepal Shaw is out of her depth as she navigates her way between an incredible Irrfan and a solid Shorey - when she isn't strident, she is sickly saccharine, neither of which can help her arouse any sort of audience empathy for a woman torn between what she wants and how quickly she wants it.

Is Murder At Teesri Manzil 302 worth its two hours? No. Towards the end of the film, Irrfan's character says: "Ummeed hai film pasand aayi hogi (I hope you liked the film)." Indeed, this is a film that is out here only in the hope of cashing in on the exceptional standing that Irrfan enjoyed as a screen performer. Do yourself - and Irrfan's memory - a favour. Pick any other film from actor's varied and substantial oeuvre and watch it.

Harry Potter 20th Anniversary: Return To Hogwarts Review - The Film Does Not Deliver Much Magic Of Its Own