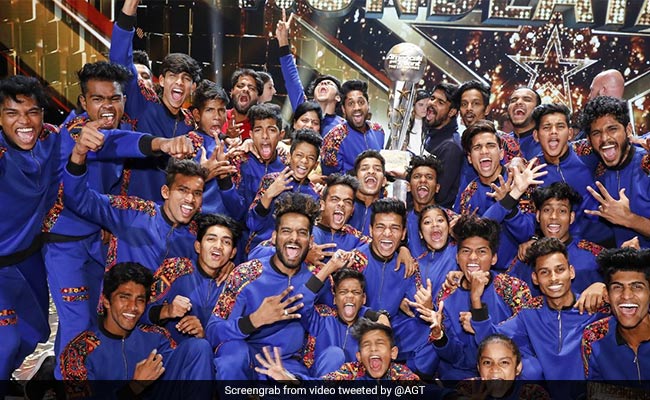 It's a proud moment for India and for dance group V Unbeatable, who won the second season of America's Got Talent: The Champions on Monday (Tuesday in India). V Unbeatable, who trended for days after appearing for the first time on America's Got Talent last year and securing the fourth place in the finale, featured in headlines once again - this time for winning the season 15 of the reality show. Upon winning the competition, judges Simon Cowell, Heidi Klum, Alesha Dixon and Howie Mandel, as well as the audience gave V Unbeatable a standing ovation. V Unbeatable delivered a mind-blowing performance by dancing to Ranveer Singh's song Tattad Tattad from Bollywood film Ram-Leela. The dance group's exhilarating stunts and musician Travis Barker's solo drum performance behind them made the whole act mesmerising.

America's Got Talent and even the dance group shared the memorable moment on their respective social media accounts. Take a look:

Impressed by the group's performance in the finale, Howie Mandel tweeted: "Wow! I knew V Unbeatable was special from the moment they walked on stage. Thank you for opening up the world to us, V Unbeatable. You deserve this incredible moment."

WOW!! I knew V.Unbeatable was special from the moment they walked on stage. Thank you for opening up the world to us, @v_unbeatable. You deserve this incredible moment.

Congratulations to my Golden Buzzer on WINNING #AGTChampionspic.twitter.com/HKvvndfRnp

V Unbeatable comprises 29 dancers from Mumbai. ICYDK, the group was originally named Unbeatable. However, when one of their team members (Vikas) died following a horrible accident, the group changed its name to V Unbeatable in his honour. Before America's Got Talent, the group has also featured Indian dance reality shows like Dance Plus 4 and India Banega Manch.

Before the finale, actor Ranveer Singh boosted the spirit of V Unbeatable and gave a massive shout-out to the dance group. For those who don't know, V Unbeatable got the golden buzzer bonus last year by performing to the track Tattad Tattad from Ranveer's 2013 film. Judges Simon Cowell, Julianne Hough, Howie Mandel, Gabrielle Union and guest judge Dwayne Wade (married to Gabrielle Union) were floored by their incredible performance in one of the episodes of the season 14.

In a video message (shared by V Unbeatable on their official Instagram page), Ranveer could be heard saying: "I am very happy that V Unbeatable have made it to the finals of America's Got Talent. This is unprecedented. I'd like to give my best wishes to the troupe. I just want to say that whatever you have achieved on the world stage is unprecedented. To do what you guys have done on the world stage in such a spectacular fashion, you have won the hearts of the entire nation."

"We are so proud of you. We love you for your dedication, commitment and honesty. Keep it going till the finals. Put in all your energy and perform with your hearts and bring it home. C'mon V Unbeatable," he added.

We can't imagine that India's Biggest Superstar @ranveersingh wishing us a good luck for our Results. This is one of the best things that has ever happen to us. thank you so much Sir for your valuable time & support to our crew. You always stand for street performers and This really means a lot for us. Thanks for your love & support. Choreographers day director @omchauhan7825 choreographer @rohitfictitious @deepikapadukone @vibhorratna #thankyou #love #blessed #great #realty #bollywood #art #agt #nbc #news #ranveersingh #deepikapadukone #award #guwhati #assam #cool #vibes

This is not the first time an Indian dance team has won an international dance reality show. Before V Unbeatable, Mumbai's dance team The Kings, comprising 14 members, won NBC's World Of Dance in 2019 and took home the prize money of $1 million.