"We are going straight to semifinals because of your tremendous votes," V Unbeatable tweeted 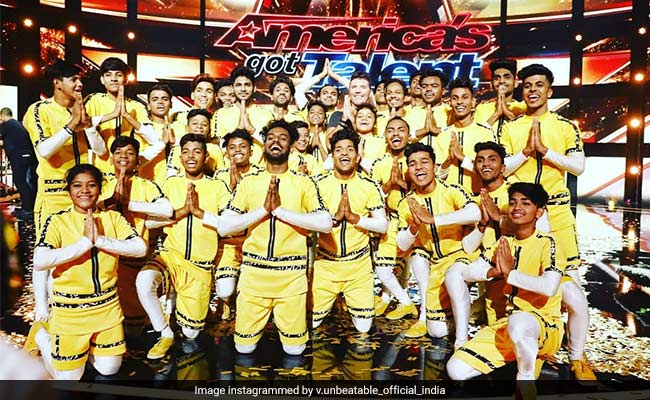 V Unbeatable on the sets of America's Got Talent. (Image courtesy: v.unbeatable_official_india)

Remember the Mumbai based dance group V Unbeatable? The group that gained massive popularity for their performances on the TV reality show America's Got Talent season 14? Well, the group has reached the semifinals of the show and has been trending incessantly for the same reason. On Thursday morning, the official Twitter handle of America's Got Talent announced that the Mumbai based group has made it to the semifinals of the show. "There's a reason they're called V unbeatable. They're going straight to Semifinals! #AGTResults," read the tweet shared by the show's official Twitter account. V Unbeatable shared the tweet and wrote: "Thank you everyone. We are going straight to semifinals because of your tremendous votes, love and blessings. Keep supporting us."

Thank You Everyone
We are going straight to semifinals because of your tremendous votes , love and blessings . Keep Supporting Us . #AGT#AGTSemifinalshttps://t.co/JKVglznA35

Meanwhile, on Instagram, the group shared the big news and wrote: "Just see the excitement level. It's all because of you guys once again thank you so much and keep supporting us to make history on America's Got Talent."

During their America's Got Talentjourney, the 29-member dance group featured in headlines especially for their performances to the song Tattad Tattad from Ranveer Singh and Deepika Padukone's 2013 film Goliyon Ki Rasleela Ram-Leela. They impressed the judges - Gabrielle Union, Howie Mandel, Julianne Hough and Simon Cowell. Check out some of their performances here:

V Unbeatable, a popular name in the dance community, became a household name after featuring on Remo D'Souza's show Dance Plus. They also featured in the reality show India Banega Manch.