How much Rishi Kapoor, Taapsee Pannu's Mulk has made so far 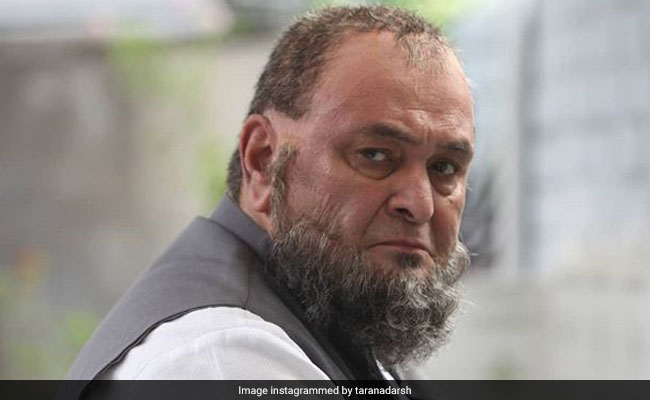 A still from Mulk (courtesy taranadarsh)

Rishi Kapoor and Taapsee Pannu's new courtroom drama Mulk has made over Rs 8 crores during its three-day stay at the box office so far, reported trade analyst Taran Adarsh. Mulk opened to theatres last Friday and scored an opening day collection of Rs 1.68 crores. Mulk, however, performed relatively better over the weekend and made over Rs 2 and Rs 3 crores on Saturday and Sunday respectively. While Mulk's performance during the weekend bettered, its performance once it enters the week will be "crucial." In his tweet, Mr Adarsh wrote: "#Mulk witnesses ample growth on Sat and Sun... Weekdays are crucial... Fri 1.68 cr, Sat 2.81 cr, Sun 3.67 cr. Total: Rs 8.16 cr. India biz."

While the film's box office numbers continue to increase, here's a look at Mulk performance at the ticket counters:

On Friday, Mulk clashed at the box office with films such as Karwaan (which has made just a shade under Mulk) and Fanney Khan.

In his review for NDTV, Saibal Chatterjee writes described Mulk as a daring move from Bollywood, citing that the movie raises uncomfortable questions: "In making its extremely timely statement, this film allows itself to lean a tad towards conventional melodrama. But it makes its point with such force that it is difficult not to be impressed. Go watch Mulk for its stout-hearted espousal of sanity. It isn't often that Bollywood shows such spine."

Mulk is the story of a Muslim family (headlined by Rishi Kapoor) who are branded as terrorists and put on trial after their son was accused of being part of a terrorist outfit. Meanwhile, Taapsee, who plays a committed advocate, leaves no stone unturned to prove the family's innocence.