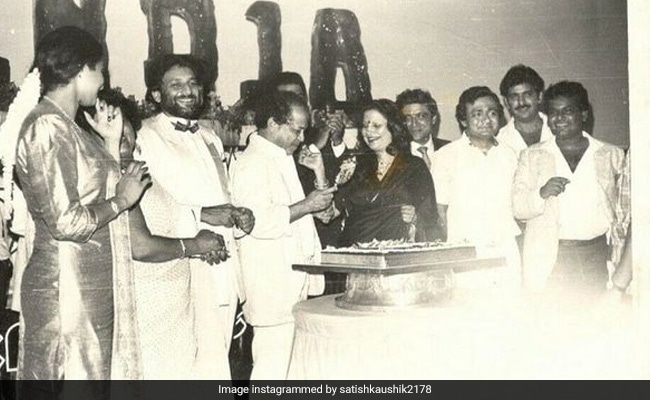 It's been almost 34 years since Shekhar Kapur's Mr India, starring Anil Kapoor and late actress Sridevi, opened in theatres but the film still rules the hearts of audience. On Monday, actor Satish Kaushik, who featured in a supporting role in the film, shared a million-dollar throwback picture from the silver jubilee celebrations of the movie. The photo features Sridevi, Shekhar Kapur, Javed Akhtar, late producer Gulshan Kumar and Satish Kaushik (from left to right). Anil Kapoor can't be seen in the picture and when his fans couldn't spot him in the frame, they left hilarious comments like "Anil Kapoor Mr India ho gaye" and "Anil ji nahi dikh rhe, Mr India watch pehena hoga."

Mr India showcased the story of street violinist Arun Verma (played by Anil Kapoor), who came across a watch which can make the user invisible. Arun Verma, in the later part of the movie, became a vigilante with the help of the device and combatted Mogambo (late actor Amrish Puri), whose villainous intentions included conquering India.

Written by Salim Khan and Javed Akhtar, Mr India is still among one of the cult films of the Indian cinema. It was produced by Anil Kapoor's brother Boney Kapoor.