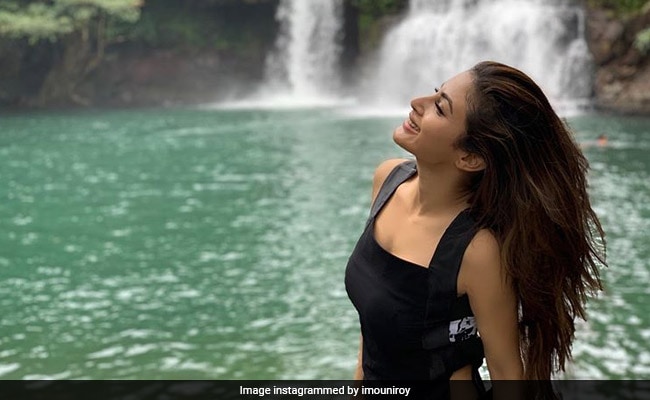 Mouni Roy might be at home but her head is clearly stuck in a "dreamy" land. The 34-year-old actress shared a stunning throwback picture of herself from one of her vacations. Mouni did not reveal the location of her vacation in her post, but we did spot a waterfall in the backdrop. Dressed in a black outfit, the Gold actress could be seen happily posing for the camera. Mouni's bright ear-to-ear grin clearly reflects her happiness in the photograph. The actress' post was flooded with fire and heart emojis.

Mouni has been delighting her fans by sharing throwback pictures on her Instagram profile. Check out some of the posts here:

Saved the best for the end! I love you because you think by hiding your face down you are invisible in the picture! I am fortunate have you, my gorgeous sister.. Unlucky for you, your good looks precedes the beautiful person you are... happy happy birthday

The actress has also been a part of television shows such as Kasturi, Devon Ke Dev...Mahadev and Naagin. She has also participated in reality shows like Nach Baliye 6, Jhalak Dikhhla Jaa 7, Lip Sing Battle and Zara Nachke Dikha.