Mouni Roy posted the video, which Ekta Kapoor deleted, and said: "I was there, I know the real story" 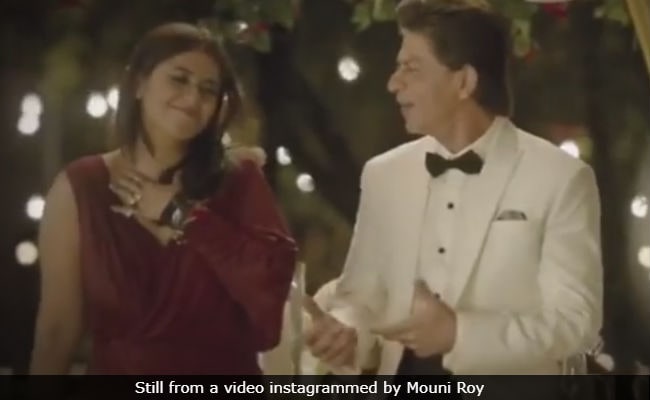 Remember Ekta Kapoor posted and then deleted a video featuring herself and Shah Rukh Khan from Instagram on Thursday? Well, actress Mouni Roy posted it on social media today. Bonus - it's an extended version and it confirms the video's connection to Ekta Kapoor's upcoming show Kasautii Zindagii Kay 2. In the video, Ekta Kapoor, dressed in a red outfit, giggles heartily as Shah Rukh asks her, "I've never seen you like this before... Is there somebody in your life? I don't gossip so you can tell me." Ekta Kapoor laughs, blushes and says, "I love you, sir." Mouni Roy, who has featured in several soaps produced by Ekta Kapoor, captioned the post: "I was there, I know the real story. I've got all the scoop #Whensrkmetekta #kasautizindagikay."

We have a feeling that Mouni Roy won't give away the "scoop" easily. Till then, watch Shah Rukh and Ekta Kapoor in this video:

I was there , I know the real story I've got all the scoop @ektaravikapoor @iamsrk #Whensrkmetekta #kasautizindagikay

She tweeted this in April:

With a piece of my broken heart I wrote in 2001,17 years later I Reboot it dipping in personal pain & lacing it with experiences of an older me! Bringing back my most successful love saga that ran for 9 yrs! Again I'll take my broken heart & make it into art! #NamesToBeAnnouncedpic.twitter.com/CbWdgEOO8h

Kasautii Zindagii Kay, starring Shweta Tiwari, Cezanne Khan and Urvashi Dholakia, aired from 2001 to 2008. Now, actress Erica Fernandes is all set to step into Shweta Tiwari's shoes to play the role of Prerna while actors Parth Samthaan and Hina Khan have reportedly been roped in to play the roles of Anurag Basu and Komolika - played by Cezanne and Urvashi, respectively.

Kasautii Zindagii Kay 2 is expected to go on air in September.