Shah Rukh Khan And Ekta Kapoor Are Trending Madly Because Of What She Posted, Then Deleted

Ekta discussed the proposal with Shah Rukh at a recent party 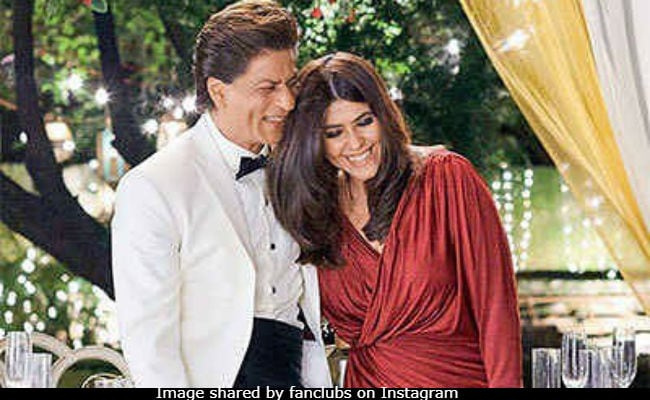 Fan clubs have made this still go viral (courtesy Instagram)

You will probably spot Shah Rukh Khan and Ekta Kapoor trending on the virtual world today. That's because the TV czarina teased her fans with a short video starring herself and the 52-year-old superstar for a brief while on Thursday morning. We say briefly because the video was deleted soon after but the window was big enough for fan-clubs to have curated it and shared around on social media. Now, citing a Mumbai Mirror report, many are claiming that the video could well be a promotional video for Ekta's Kasautii Zindagii Kay 2. Ekta reportedly convinced Shah Rukh to launch the promo of Kasautii Zindagii Kay 2 and this may be just a glimpse of their professional partnership.

According to the Mumbai Mirror report, Ekta discussed the proposal with Shah Rukh at a recent party, when he decided to come on board. "Following a brainstorming session, Ekta decided to join in and the two discuss timeless romance on camera with SRK playfully prodding Ekta about her love life," Mumbai Mirror quoted a source as saying.

In the video, Ekta can be seen dressed in a red ensemble while SRK is as suave as ever in a tuxedo. Here's how the conversation goes: "Teri life mein hai kuch? Naya pyaar hai? You can tell me. Ekta, main hoon, mujhe toh bol sakti hai!" Shah Rukh tells Ekta, who then blushes and replies: "I love you, sir." Ekta Kapoor had uploaded the video, which has now been taken down, with the caption: "Oooooops! I was dying to say it's you sir! But I shut up! Otherwise I'm in love with my work #halftruths #mugshots." The video actually appears to be a BTS moment from a shoot:

Meanwhile, no release date has been assigned to Kasautii Zindagii Kay 2, which featured Erica Fernandes in the lead role of Prerna (which was played by Shweta Tiwari in the original version). Parth Samthaan will reportedly play the role of Anurag Basu, which was played by Cezanne Khan for most of the show. Hina Khan is also reportedly in talks to play Komolika in Kasautii Zindagii Kay 2.

Kasautii Zindagii Kay is expected to go on air from September 10.