Kajol and Ajay Devgn have taken time off from their busy schedule for a family holiday in Maldvies. Both the actors are constantly updating Instagram with pictures from their holiday 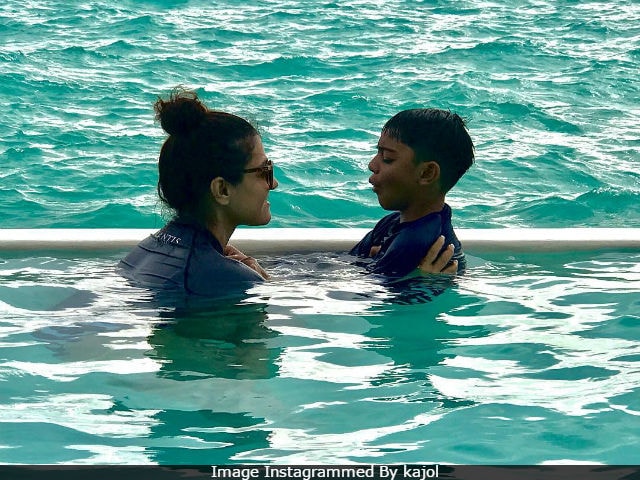 New Delhi: Actor couple Kajol and Ajay Devgn have taken time off from their busy schedule for a family holiday in Maldvies. Both Kajol and Ajay are constantly updating Instagram with pictures from their holiday, featuring their daughter Nysa, 13, and son Yug, 6. The Devgn family has chosen the best time for a vacation as Ajay and Kajol have wrapped their work commitment a few days ago. Ajay has got time off from his Golmaal Again as his director Rohit Shetty is in Spain and Kajol recently wrapped the shooting of her Tamil film Velaiyilla Pattathari 2 (VIP 2). Ajay's sisters, their children have also accompanied the family for the vacation.

Here are more pics from Kajol and Ajay's Maldives holiday.

This picture of Kajol with Yug is so adorable.

It seems for Ajay, cycling is the best way to get relaxed.

In case you missed the old pics, here they are. (You can thank us later)

Promoted
Listen to the latest songs, only on JioSaavn.com
Kajol and Ajay Devgn are married for over 18 years now. They are co-stars of films such as Ishq, Raju Chacha, Pyar Toh Hona Hi Tha and Dil Kya Kare. In 2008, Ajay directed U Me Aur Hum, which starred him and Kajol in the lead roles.

This year, Ajay will be seen in Milan Luthria's Baadshaho and Rohit Shetty's Golmaal Again, the fourth film in Golmaal series. Meanwhile, Kajol is making a comeback in Tamil films almost after two decades with Dhanush's VIP 2. The film is scheduled to release on July 28.