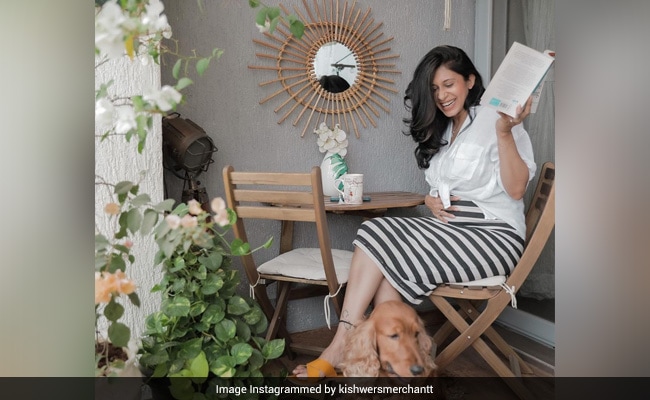 TV actress Kishwer Merchantt, who is currently expecting her first child with her husband and TV actor Suyyash Rai, on Tuesday treated her fans to a new picture of herself. She has been actively sharing pictures from her maternity diaries on Instagram. In the picture, Kishwer can be seen smiling with her eyes closed as she posed in front of a fancy mirror. Kishwer can be seen holding a book about pregnancy in her hand, in the picture. In the caption of the post, Kishwer enlisted the reasons why everyone should "approach her with Caution." Further talking about how pregnancy is making her "sober, swollen and hungry," the TV actress wrote: "I am pregnant, which means I am sober,swollen and hungry!!! Approach with CAUTION."

Several fans of the TV actress reacted to the post and flooded the comments section. TV actress Anita Hassanandani's husband Rohit Reddy also commented on the post stating that he has read the book that Kishwer is holding in the picture. "Best book! Read it cover to cover in a week," Rohit commented. Rohit and Anita have recently welcomed a baby boy named Aaravv.

Earlier in the day, Kishwer had revealed that she celebrated the "bestest holi" this year with her husband Suyyash. She shared several pictures from her Holi celebrations on Instagram. One of the pictures featured Suyyash hugging Kishwer's baby bump affectionately.

During the beginning of this month, the soon to be mom was enjoying a vacation in the Maldives. She had shared several pictures from her trip with her Instafam.

Check out some pictures here:

On March 3, Kishwer and Suyyash announced that they are expecting a baby. Kishwer is known for her performances in TV shows like Itna Karo Na Mujhe Pyaar and Ek Hasina Thi.