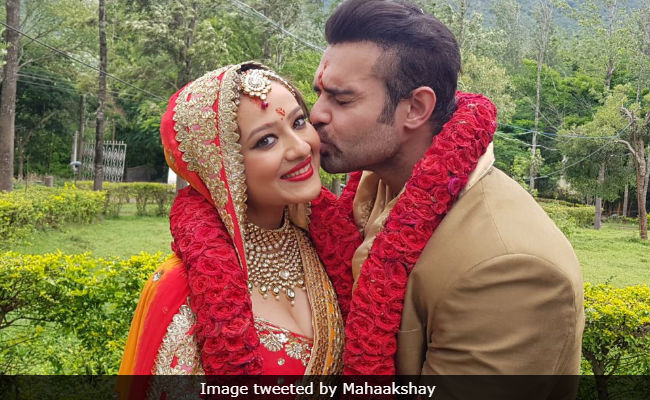 Mithun Chakraborty's son Mahaakshay, also known as Mimoh, married actress Madalsa Sharma in an intimate ceremony on July 10, three days after it was initial scheduled date. Mahaakshay and his mother Yogita Bali were granted anticipatory bail (in connection with a rape case) on July 7. Mahaakshay announced he's married on Twitter with three pictures, which he captioned: "Ladies and gentleman... Mr and Mrs Chakraborty." Madalsa is the daughter of filmmaker Subhash Sharma and actress Sheela Sharma (Hum Saath-Saath Hai and Ghatak).

An FIR was filed against Mahaakshay Chakraborty and his mother Yogita Bali earlier this month. The plaintiff accused Mahaakshay of cheating and raping on the pretext of marriage while Yogita Bali was accused of threatening the complainant of dire consequences if she continued the relationship, reported news agency PTI. A Delhi court on July 7 granted anticipatory bail to Yogita Bali and Mahaakshay saying they have "deep roots in society and are not likely to abscond," reported PTI.

Speaking about her relationship with Mahaakshay, Madalsa earlier told SpotboyE: "Families took the first call and then we took our relationship ahead. So you can say it's an arranged-cum-love marriage in our case." They got engaged in March, revealed Madalsa: "It was at Mimoh's Mumbai house. We exchanged rings."

Mahaakshay debuted in the industry in 2008 film Jimmy and he went on to star in films such as Enemmy, Loot and Haunted - 3D. He was last seen in 2015's Ishqedarriyaan. Madalsa Sharma has featured in several Hindi and Telugu films, including Angel, Samrat & Co and Paisa Ho Paisa.