In the video, Raveena can be seen setting the stage on fire to the song Ye Raat from 2001 movie Aks. 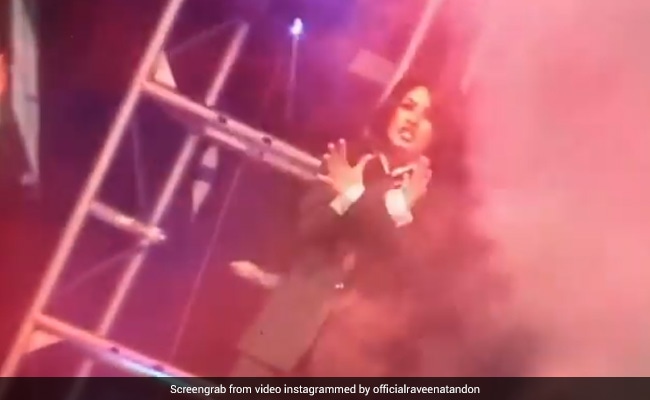 Raveena Tandon in a still from her video (courtesy officialraveenatandon )

Actress Raveena Tandon took a trip down memory lane and landed straight in 2000. She dug out a throwback video of herself performing to a love audience at a concert and shared it with the emotions evoked by the memory. "Throwback 2000, dancing to one of my favourite songs from Aks .Enjoying every bit of it, can see it on my face. I just love and miss performing concerts in front of a live audience. Nothing like feeling the nervousness, thrill of getting out there and belting it out. The throbbing energy, the vibe, resonating from the audience, wants to make you give out your best," Raveena captioned her post. In the video, Raveena can be seen setting the stage on fire to the song Ye Raat from 2001 movie Aks.

Here's what Raveena Tandon shared from her archives:

Raveena Tandon loves to revisit old memories. Earlier this month, she had shared a few memories from shoot diaries of 1993 movie Kshatriya, co-starring Sunny Deol, Divya Bharti and Sanjay Dutt. "Some throwback pics from the early 90s, Saif and I clowning around during Imtihaan shoot , Kshatriya shoot with Saroj ji, Sanju, Sunny and Divya..." read a part of her caption.

In terms of work, Raveena Tandon will next be seen in a web-series titled Legacy. To be directed by Vijay Gutte, Legacy will be the first time Raveena Tandon and Akshaye Khanna will share screen space - they featured in 2003 war drama LOC: Kargil but did not have scenes together. Raveena Tandon made the big announcement about her OTT project on Gudi Padwa.