We feel you, Raveena Tandon 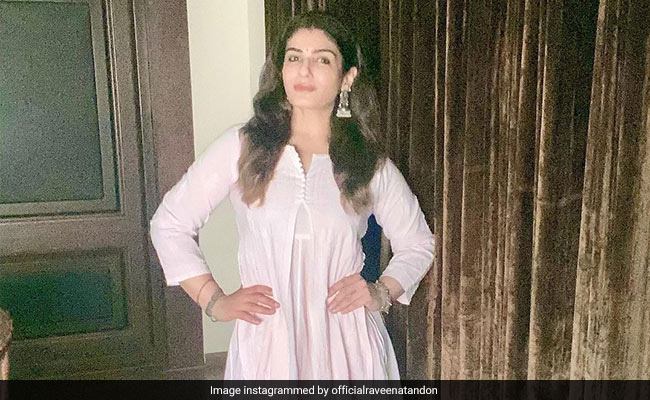 Raveena Tandon's routine during the 15-day lockdown is quite interesting, a glimpse of which she shared on her social media profile on Tuesday. The actress posted a bunch of pictures of herself to show how she gets dressed up on "hot summer afternoons" just to sit at home and "strike a pose." In the pictures, Raveena Tandon looks gorgeous in a white traditional outfit. She paired her look with earrings, bangles and gold mojari. "Hot summer afternoons, and nowhere to go and nothing to do ... so #strikeapose," she wrote in the caption of her post. Take a look:

Raveena Tandon adopted two daughters - Pooja and Chaaya - in the 1990s when she was a single mother. She later married Anil Thadani in 2004 and the couple welcomed their daughter Rasha in 2005 and son Ranbir Vardhan in 2008.

On Rasha's 16th birthday recently, Raveena Tandon shared a bunch of throwback pictures of her daughter and wrote: "When, just when did you grow up so fast ... 16, my lil baby .My kind, sweet, affectionate, compassionate, caring lil girl...Happy 16th baby!"

In terms of work, Raveena Tandon made her debut as an actress with the 1991 film Patthar Ke Phool. She has featured in films like Dilwale, Mohra, Andaz Apna Apna, Khiladiyon Ka Khiladi, Ziddi, Ghulam-E-Mustafa, Gharwali Baharwali, Bade Miyan Chote Miyan, Dulhe Raja and Anari No 1.

Raveena Tandon will next be seen in Yash's KGF: Chapter 2, which also stars Sanjay Dutt. Directed by Prashanth Neel, the film is one of the most awaited films of the year.