ICYDK, Zain likes to "stick" to both his mom and dad 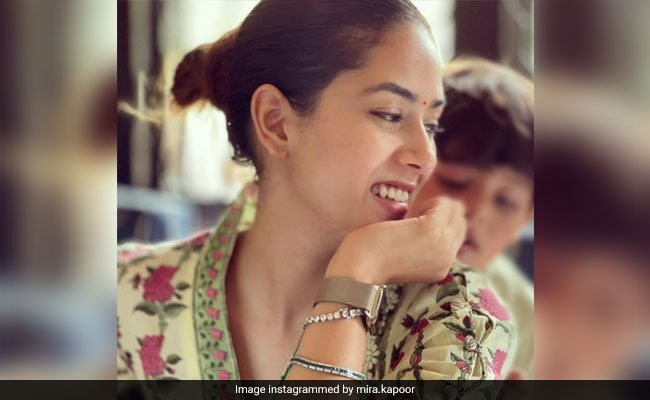 Mira Rajput lit up Instagram on Sunday by sharing a super adorable photo of herself and her little son Zain. Shahid Kapoor and Mira Rajput got married on July 7 in 2015. The couple welcomed Misha in August 2016 and Zain on September 5, 2018. In Mira Rajput's latest post, Zain can be seen behind her but out of focus. Mira looks pretty in a traditional outfit in the image. Sharing the photo, Mira gave us a glimpse of her heartwarming conversation with her little son. She wrote: "'Zain now that Papa's back can you stop sticking to me'. 'No Mama now I will stick to you AND Papa'." Shahid Kapoor was busy shooting for his film Jersey and a web-series.

Shahid Kapoor will make his digital debut in a series directed by filmmaker duo Raj Nidimoru and Krishna DK. Earlier, talking about collaborating with the directors, known for their web-series The Family Man and films like Go Goa Gone, Shor In The City and Stree, the actor said: "I couldn't think of anyone better for my digital debut than them. Amazon Prime Video is a fabulous service and it's a privilege to work with them. I loved the story idea when I first heard it and since then it has been an exciting ride so far! Can't wait to share this series with the audience," reported news agency PTI.

Shahid Kapoor will next be seen in Jersey, is a Hindi remake of the Telugu film of the same name. Gowtham Tinnanuri, who directed the original movie, is also helming the Hindi version. In Jersey, Shahid Kapoor will play the role of a cricket enthusiast whose dream to join the Indian cricket team is fulfilled when he is in his 40s. The film will hit cinemas on December 31 this year.

Mira Rajput, on the other hand, made her acting debut in a TV commercial for an anti-ageing cream last year.