Leave it to Kim Kardashian to surprise us with every look 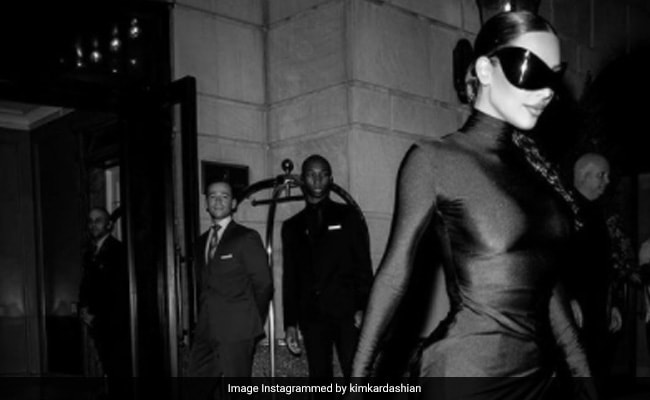 It would be fair to say that Kim Kardashian has been obsessing over all-black looks. She wore it to the New York Fashion Week, to the Met Gala and even to the after party. Kim shared a glimpse of her Met Gala afterparty look and it is stunning. She wore a black catsuit and she accentuated it with a mask (only covering her eyes this time). She had her hair styled in a sleek ponytail. Just like her Met Gala outfit, this was too was designed by Balenciaga. In an Instagram post, Kim also explained her viral Met Gala look and she wrote: "What's more American than a T-shirt head to toe?"

This is Kim Kardashian's after party look:

Her Met Gala look was an all-black outfit that covered her face. The outfit was created by Demna Gvasalia, the creative director of Balenciaga. Kim's OOTD also included a long train.

Meanwhile, Kim's sister Kendall Jenner's pick for both the events was Givenchy. For the party she picked a red piece, which she accessorised with a statement necklace.

Kendall Jenner wore a sheer embellished Givenchy gown at the Met Gala and she was quite a head-turner.

Keeping Up With The Kardashians made global stars of Kim and her sisters Kourtney and Khloe Kardashian as well as Kendall and Kylie Jenner. The show was a life-changing affair for the Kardashian sisters. It first premiered in October 2007 on cable network E! and was a huge hit with the masses.

Keeping Up With The Kardashians explored all the facets of the Kardashian-Jenner clan - the good, the bad, the ugly and obviously, the flashy. The stars exposed their lives on the show for 14 years.