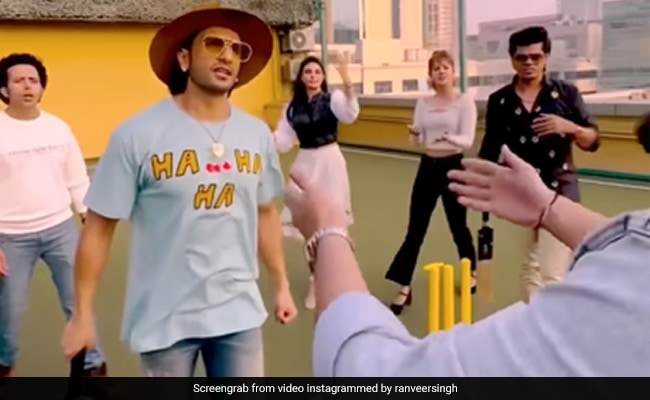 Ranveer Singh in a still from the video.(courtesy: ranveersingh)

Ranveer Singh's upcoming film Cirkus promises to be a fun ride from its posters and teasers. Now, with the trailer release around the corner, the excitement in the air is palpable. But it looks like Ranveer Singh and his team are not the only ones excited by the trailer. In a new fun video shared by Ranveer, content creator and YouTuber Ashish Chanchlani made a quick run to director Rohit Shetty's office to demand that the team share the trailer before the actual release date. The video features Ashish asking staff in the office to get him access to the trailer before running into the team playing cricket on the terrace. On seeing Ranveer – who is ready to bat – Ashish asks him to show the trailer. To this, Ranveer says, “Dekh bhai, meri na ghar pe chalti hai, na office mein. Main aapko trailer nahi dekha sakta. [I have no say at home or in the office. I cannot show you the trailer].”

After that, he also asks Varun Sharma and Pooja Hegde but to no avail. Later the iconic Johnny Lever teases him further by saying, “Kamal ka trailer hai. Pagal ho jaoge.[It is an amazing trailer. You will go crazy].”  The video then shows Ashish Chanchlani finally meeting director Rohit Shetty. In the caption, Ranveer said, “Sabko hai besabri se intezar...parson dekhna Rohit Shetty and Team ke jalwe [Everyone is waiting with bated breath. Day after you can witness the talent of Rohit Shetty and team].”

Watch the video to see what happens next:

Meanwhile, Ranveer Singh also shared a new poster of the film on Thursday, announcing that the trailer will be out on December 2. In the caption, he wrote, “Trailer out tomorrow.” He also added the hashtag #CirkusThisChristmas and tagged Rohit Shetty and T-series. The film is slated to release in theatres on December 23 and features Ranveer Singh opposite Jacqueline Fernandez and Pooja Hegde.