Cirkus is being headlined by Ranveer Singh in a double role 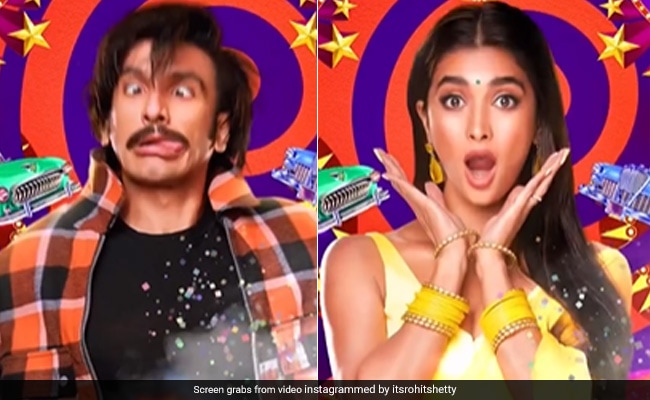 Rohit Shetty is back to entertain cinema lovers with his next project, Cirkus. The director will also be producing the film that is being headlined by Ranveer Singh. While the trailer of the film is being released next week, Rohit Shetty has treated fans to a glimpse of the world that Cirkus is set in. The filmmaker has released a teaser video of sorts that features individual posters of the cast, who all look at ease in their characters. The teaser of Cirkus -- which appears to be a snazzy comedy-- features Ranveer in a double role alongside Pooja Hegde, Jacqueline Fernandez, Johnny Lever, Sanjay Mishra, Varun Sharma, Tiku Talsania, Vrajesh Hirjee and others.

The teaser begins with the text, “We are back to entertain your family this Christmas.” The film will be released in theatres on December 23. The backdrop of the teaser is a riot of colours with vintage cars and stage curtains creating the perfect setting. There is also a “Jubilee Cirkus” mentioned in the bottom right corner of the video. Sharing the teaser, Rohit Shetty said, “Before the trailer drops next week, meet our CIRKUS family. #CirkusThisChristmas.”

Earlier this month, Ranveer Singh announced the wrap of the film and said, “Shooting khatam, Promotion ki planning shuru! Mass-ter filmmaker ke Mass-ter plans!!! Buahahahaha! #CirkusThisChristmas.” In the image, Ranveer is sitting with Rohit Shetty and Varun Sharma and sharing a laugh, surrounded by vintage cars and a board with "Cirkus" written on it. Varun Sharma reacted to the post by saying, "Fullll Powerrrrrr," followed by heart and fire emoticons.

Earlier this year, Ranveer Singh was seen in Jayeshbhai Jordaar. In addition to Cirkus, he will also be seen in Rocky Aur Rani Ki Prem Kahani with Alia Bhatt.

Rohit Shetty and Ranveer Singh have previously collaborated on projects such as Simba and Sooryavanshi. Cirkus is jointly produced by Rohit Shetty Picturez, Reliance Entertainment and T-Series.