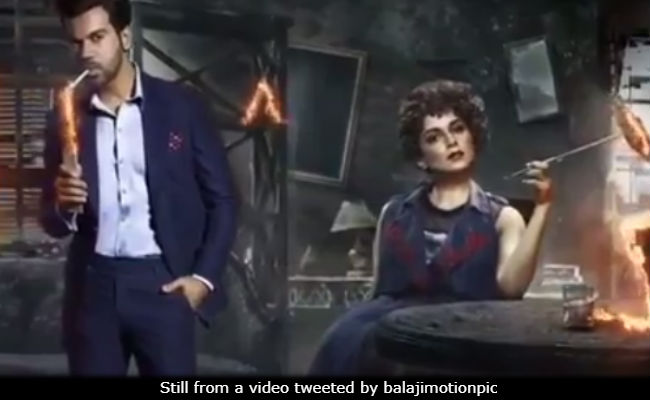 The makers of Mental Hai Kya on Tuesday shared a glimpse of the film, starring Kangana Ranaut and Rajkummar Rao in the lead roles. "They're here to set fire to your perceptions. Trust No One!" read a post on the official Twitter handle of Ekta Kapoor-led Balaji Motion Pictures. Along with it, they released a 17-second motion poster. which doubles as a teaser, and gives insight into the film's plot - a mystery (murder mystery, perhaps?) and two suspects. Mental Hai Kya is a dark comedy directed by Prakash Kovelamudi and it is produced by Ekta Kapoor. The film also stars Amyra Dastur and Jimmy Sheirgill.

They're here to set fire to your perceptions. Trust No One!#MentalHaiKya#TrustNoOne#KanganaRanaut@RajkummarRao@ektaravikapoor@RuchikaaKapoor@ShaaileshRSingh@pkovelamudi@KanikaDhillon@ZeeMusicCompany#MentalHaiKyaOn26thJulypic.twitter.com/Wm2iUe4qtL

The trailer of Mental Hai Kya will release soon while the film will open in theatres on July 26.

Speaking about the film, Amyra Dastur, who reportedly plays Rajkummar's onscreen girlfriend in the movie, told news agency IANS: "This film is definitely going to shock and awe our audience especially because I truly feel that no one has seen this side of acting from the cast before."

Mental Hai Kya recently featured in headlines after reports of Kangana Ranaut taking over the project surfaced on social media. It was reported that Kangana was re-filming portions of the movie as she was unhappy with the trajectory of her character. However, Kangana's sister Rangoli Chandel, who is also her spokesperson, dismissed the reports in a series of tweets blaming the "nepo gang" for spreading fake stories to "harm" Kangana's career.