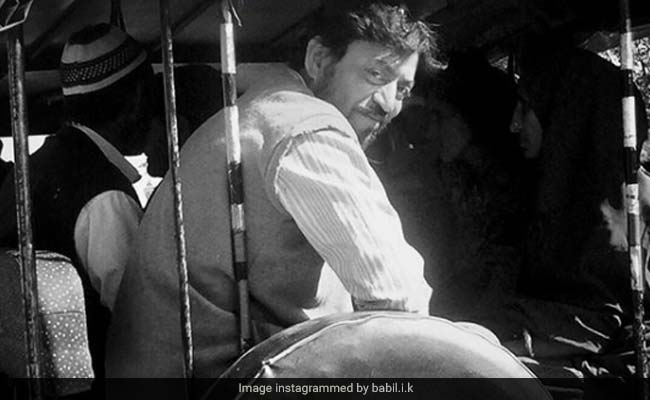 Late actor Irrfan Khan's son has many more pictures and memories to share from the family's Madh Island home. After sharing pictures from his father's old room and a wall decorated with pictures from his childhood diaries, Babil shared new posts sharing glimpses of walls adorned with old family pictures and the posters of Irrfan Khan's films such as Maqbool, Paan Singh Tomar and Billu Barber (which released as Billu). In a separate post, Babil shared pictures from his father's library, which also had shelves stacked with old scripts (Babil confirmed in the comments thread to a curious fan).

Here are the recent posts shared by Babil captioned, "Memories at that house by the beach."

Memories at that house by the beach. Part II.

Memories at that house by the beach, Part I

Irrfan Khan, who was diagnosed with cancer in 2018, died in Mumbai on April 29. He is survived by his wife Sutapa Sikdar and sons Babil and Ayan. Babil is studying films and he frequently shares lessons he learnt from his father about films, filmmaking and acting.

Late on Wednesday, Babil also shared pictures from their Madh Island home and said, "This is my father's old room near the beach before we shifted to the city. This is where he did most of his work."

This is my father's old room near the beach before we shifted to the city. This is where he did most of his work. Studying acting now, I think of one of the ideas that he used to implement; that the craft has immense emotional similarities to playing around as a child. At age 9, when you hold that cricket bat inside the walls of your room, you can feel a stadium roar and see a bowler rushing to knock your head off. When I held that nerf gun in my hands, my father's empty room always echoed in the silence of Madh Island, but in that moment I was John Wick surrounded by bad guys with machine guns, gunshots everywhere, and you can hear them, you know? I was a woman once, after watching chak de India and I'd get excited dribbling around imaginary defenders and then really shoot that solid ball with my hockey stick and I'd break something. Oh I'd always break something, ma would get so pissed. I think you've got to find the child in you and keep it alive, no matter how old you get.

Irrfan Khan was one of India's prominent actors who also catapulted to international stardom after featuring in movies such as Life Of Pi, The Namesake, Jurassic World and Inferno, among others. At home, he starred in critically acclaimed movies such as Piku, Haider, Paan Singh Tomar, Maqbool and The Lunchbox.