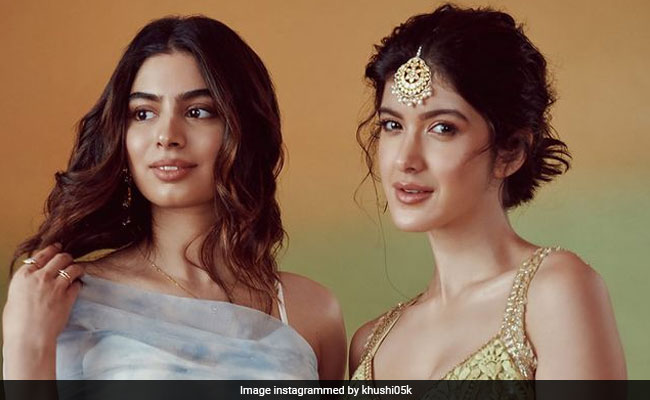 Antara Motiwala Marwah's baby shower called for a fam-jam, where the Kapoor sisters - two in particular - stole the show. We are talking about cousins Khushi and Shanaya Kapoor, both of who were dressed to steal the limelight. On Wednesday, Khushi Kapoor picked out one of her favourite memories, also starring her partner-in-crime Shanaya Kapoor, from the baby shower festivities and posted it on Instagram. No words needed for the adorable click of Khushi and Shanaya but Khushi captioned it anyway with a bunch of emojis - one of an angel and the other of a devil. LOL. Here, meet the angel and the devil of the Kapoor khandaan:

For Antara Motiwala Marwah's baby shower, Shanaya Kapoor opted for a Manish Malhotra lehenga in shades of pastel. Khushi Kapoor joined the stylish crew of the Kapoor sisters in a powder blue lehenga from the studios of Anita Dongre.

Khushi Kapoor aspires to be an actress and studies at the New York Film Academy. Meanwhile Shanaya Kapoor is all set to be launched by Karan Johar's Dharma Productions. Shanaya made her debut at the Le Bal in Paris in 2019. However, she has also already joined Bollywood but not as an actor but as an assistant director for Netflix release Gunjan Saxena: The Kargil Girl, which stars Khushi's elder sister Janhvi Kapoor in the lead role.