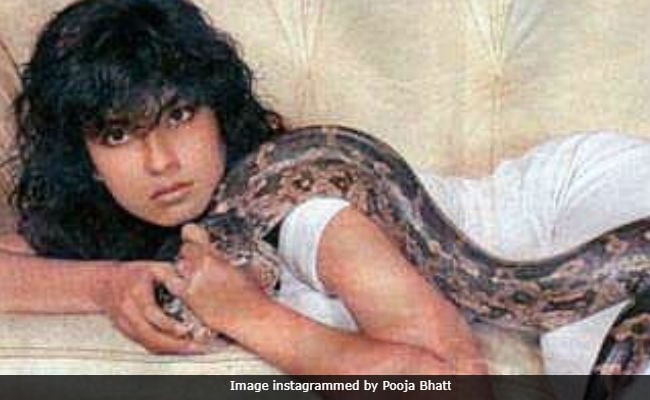 New Delhi: This is what Throwback Thursdays are for... Thank you, Pooja Bhatt. The actress-turned-filmmaker on Thursday introduced her Instagram followers to one of her 'most gracious co-stars' from the 'roaring 90s.' Pooja shared a picture from one of her old photoshoots and captioned it: "Remember this Jayesh Sheth? Shot at the Magna office without any fuss and with one of the most gracious co-stars I worked with." In case you're still figuring out who Pooja's 'co-star' is, it is the python. "#beentheredonethat #nofuss #roaring90s" were some of the hashtags she used. Take a look at Pooja's fabulous throwback picture here:

Remember this @jayeshoo ??!! Shot at the Magna office without any fuss and with one of the most gracious co-stars I worked with ; ) #jayeshsheth #PoojaBhatt #photoshoot #stardustmagazine #stardust #magna #hiss #python #beentheredonethat #nofuss #goodtimes #roaring90s

Pooja Bhatt has a treasure trove of throwback pictures from the Nineties when she was at the peak of her acting career. Last month, Pooja Bhatt had instagrammed a picture from a photoshoot from the "simple times with no photoshop."

Been there,done that,bought and sold the t shirt. And these were the days where gyms were not temples and cocaine not passed around as a means to validate yourself,cut fat or get laid. These were simple times with no photoshop nor bullshit. Our bodies or lack of them were by the by. Personality ruled and still exists. My dear friend Sumeet Chopra shot this and it was the first outdoor shoot @dabbooratnani assisted him on. I still cant forget the expression on Dabboo's face when he walked in and saw Sumeet rip a t shirt in half and ask me to wear it. #flashback #beentheredonethat #notricks #whatyouseeiswhatyouget #SumeetChopra #photoshoot #funtimes #authentictimes #funaboveall #itsnevertheactbuttheattitude

Pooja Bhatt debuted in Bollywood in 1990 film Daddy, which was directed by her father and also featured Anupam Kher. She was among the top crop of Bollywood actresses of the Nineties. She made in films such as Dil Hai Ki Manta Nahin and Sadak among others. Pooja Bhatt made her debut as director with 2003's Paap.

Pooja Bhatt is the daughter of Mahesh Bhatt and his first wife Kiran (born Lorraine Bright). Her younger brother Rahul Bhatt is a fitness trainer and has also featured in celebrity reality show Bigg Boss. Actress Alia Bhatt, who celebrates her 25th birthday today, and Shaheen are Pooja and Rahul's half-sister. Alia and Shaheen are Mahesh Bhatt's children with his second wife Soni Razdan.