Pooja Bhatt Posts Pic Of Herself From A Time Before Photoshop

Pooja Bhatt said: "Our bodies or lack of them were by the by. Personality ruled and still exists" 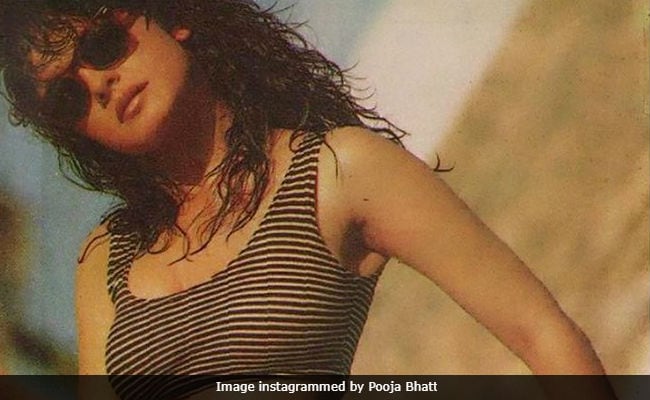 New Delhi: Thursday came early this week for actress-director Pooja Bhatt who posted a throwback picture of herself from an age that was innocent of photoshop and in which 'personality ruled.' The picture is of a young Pooja -we'd guess it was taken sometime in the Nineties when she was among the top crop of Bollywood actresses. Pooja's post appears to be a comment on current times and practices: her remark that 'gyms were not temples' at the time this picture was taken implies that now they are and while that debatably true, given the number of pictures we run practically daily of celebs going to the gym, her other dismissal that 'cocaine (was) not passed around' is more complicated. Pooja plainly has insider knowledge we won't dispute but it does seem like a conflict of interest to be religiously hitting the gym and then pumping yourself full of drugs.

Also, the crop top Pooja's wearing in this photo is actually just a t-shirt ripped in half - this also being a more DIY fashion age (apart from no photoshop).

Been there,done that,bought and sold the t shirt. And these were the days where gyms were not temples and cocaine not passed around as a means to validate yourself,cut fat or get laid. These were simple times with no photoshop nor bullshit. Our bodies or lack of them were by the by. Personality ruled and still exists. My dear friend Sumeet Chopra shot this and it was the first outdoor shoot @dabbooratnani assisted him on. I still cant forget the expression on Dabboo's face when he walked in and saw Sumeet rip a t shirt in half and ask me to wear it. #flashback #beentheredonethat #notricks #whatyouseeiswhatyouget #SumeetChopra #photoshoot #funtimes #authentictimes #funaboveall #itsnevertheactbuttheattitude

Promoted
Listen to the latest songs, only on JioSaavn.com
Pooja Bhatt debuted as an actor in her father's 1990 film Daddy, co-starring Anupam Kher. Pooja was one of the top stars of the Nineties, appearing in films such as Dil Hai Ki Manta Nahin and Sadak. She made her debut as director with 2003's Paap.