Varun and Shikhar are all smiles as they pose for the camera. 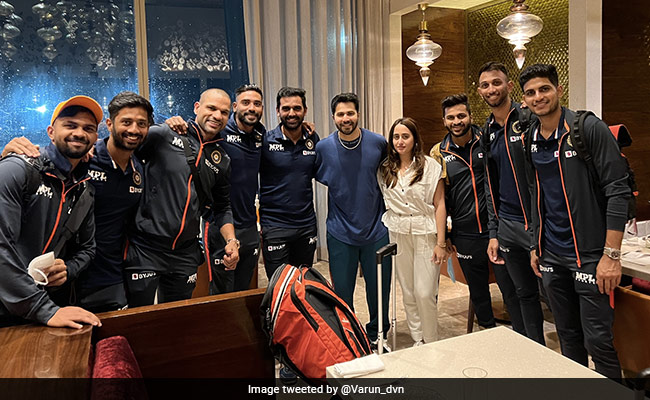 What happens when Dhawan meets Dhawan? Wondering what are we talking about? Hint: It has a cricket connection. Hope you are able to get a clearer picture now. Yes, it is about Varun meeting India cricketer Shikhar Dhawan. The actor has shared a pic with the flamboyant batter on Instagram. And, within no time, it has spread like wildfire. The two are all smiles as they pose for the camera. The caption read, “Dhawans”.

Shikhar Dhawan and Varun Dhawan ran into each other at the airport, early in the morning today. How do we know? Varun has shared all about his experience of meeting and chatting with the Indian squad in a tweet. The actor mentioned that he was “like a boy in a candy shop” on meeting the “men in blue” at 4 am. In the pictures shared by Varun, we can also spot his wife Natasha Dalal.  His tweet read, “At 4 in the morning, I was like a boy in a candy shop. Got very excited to meet and chat with our men in blue about their upcoming tour. Also, Shikhar Dhawan asked me a couple of riddles.”

At 4 in the morning I was like a boy in a candy shop. Got very excited to meet and chat with our men in blue
About their upcoming tour. Also @SDhawan25 asked me a couple of riddles ???? pic.twitter.com/DbknESJB0k

Meanwhile, Shikhar Dhawan jetted off to Zimbabwe with the Indian cricket team for their upcoming ODI series. KL Rahul is leading the squad while Shikhar Dhawan will be his deputy.

On the other hand, we have no clue about Varun Dhawan and Natasha Dalal's next stop. The actor is currently riding on the success of JugJugg Jeeyo, which also featured Kiara Advani, Anil Kapoor, and Neetu Kapoor.

Varun Dhawan will be next seen alongside Kriti Sanon in the horror-comedy Bhediya. He also has Baawalwith Janhvi Kapoor in the queue.