"It will be spectacularly different," said Vidyut Jammwal 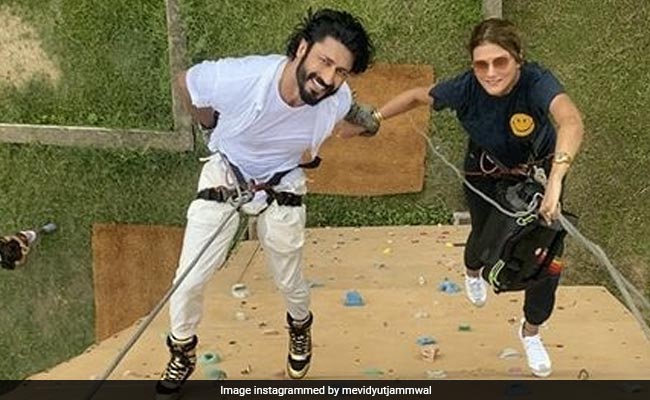 Actor Vidyut Jammwal, who recently got engaged to designer Nandita Mahtani, in an interview with Indian Express, opened up about his ideal wedding plan and more. The Commando actor told Indian Express that he doesn't want a conventional wedding and said, "Wedding is going to be happening exactly like this. It can't be just regular. I'm not regular. I don't want to do anything that's regular. So I don't have a date. I don't know when it is going to happen, but I have an idea. It will be spectacularly different. Yeah, maybe we try skydiving with 100 guests, all in those skydiving gear and they'll all jump with me. That would be so cool."

Vidyut Jammwal's proposal was anything but regular. "Did it the Commando way" he wrote while sharing a photo of himself and Nandita rock climbing together. "Couldn't keep him hanging any longer... said yes!" Nandita Mahtani wrote in her Instagram.

See the pictures from the proposal here:

A few weeks before that, photos of Vidyut Jammwal and Nandita Mahtani posing hand-in-hand at the Taj Mahal sparked speculation that the couple may have secretly got engaged. See the pictures here:

Vidyut Jammwal is best-known for starring in action movies such as the Commando series of films, Junglee, Bullett Raja, Khuda Hafiz and Force, to name a few. He stepped into the Indian entertainment industry as a model and he recently launched his production house named Action Hero Films. As his first production, Vidyut Jammwal announced a new film IB 71, which will be directed by Sankalp Reddy. Vidyut Jammwal is currently busy with the shooting schedule of his next - Khuda Haafiz: Chapter II, a sequel to his 2020 movie.