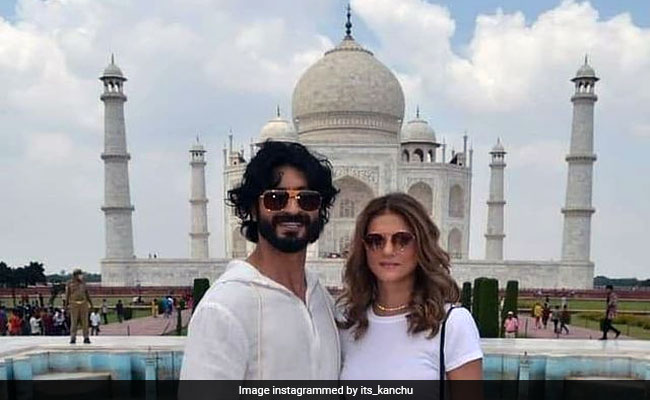 Actor Vidyut Jammwal and designer Nandita Mahtani found the top spot on the trends' list on Saturday after photos of the rumoured couple from their Taj Mahal trip went crazy viral on the Internet. In the viral photos, shared by fan clubs, Vidyut and Nandita can be seen posing together - also hand-in-hand in one some of them. What sparked rumours about a speculated engagement is the rock on Nandita Mahtani's ring finger. In the loved up photos, Nandita Mahtani's ring is clearly visible - Nandita Mahtani and Vidyut Jammwal were colour coordinated in white at the Taj Mahal. Here are the trending photos which are doing the rounds on the Internet:

Meanwhile, the designer had given a huge shout out to Vidyut when he launched his production house: "Congratulations V! Success, love and good luck to you and team," she wrote while Vidyut replied: "Thank you Nandi baby."

Vidyut Jammwal is one of the most celebrated martial artists in India. In terms of films, Vidyut Jammwal is known for starring in actor movies such as the Commando series of movies, Junglee, Bullett Raja, Khuda Hafiz and Force. He also recently launched his production house named Action Hero Films. As his first production, Vidyut Jammwal announced a new film IB 71, which will be directed by Sankalp Reddy. Vidyut Jammwal is currently busy with the shooting schedule of his next - Khuda Haafiz: Chapter II, a sequel to his 2020 movie.