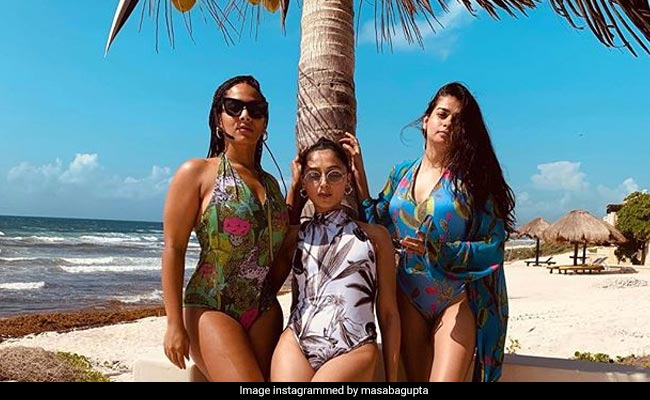 Designer Masaba Gupta is soaking up the sun in the beaches on Mexico as she's holidaying with her friends in the beach destination as part of a girls-only trip. The 30-year-old designer is slicing out time every now and then to offer glimpses of her envy-inducing vacation on Instagram and also spotted chilling with her on the beaches of Mexico are designer Pernia Qureshi and celebrity stylist Tanya Ghavri. Ehen on vacation, Masaba's friends also filled up their Instagram diaries with photos and stories from Tulum and we can only say one thing - wow. In one of the pictures, Masaba, Pernia and Tanya can be seen basking in the sun in Masaba Gupta swimwear. "Beach bums," the designer captioned the photo while in another, she can be seen chilling with Pernia in a tropical co-ord set.

Here's how Masaba Gupta is making us so, so, so jealous:

Masaba Gupta's swimsuit pictures almost always take the Internet by storm. She often puts up powerful posts on body standards, believes: "I've come to realise that beauty is a different kind of burden as you keep growing. When I was younger, it was more of a longing to be conventional and check all the boxes/fit-in kind of a burden. Now, that I'm almost 30... its more an unapologetic, rebellious kind of a burden. Either way, this whole damn idea of beauty is a burden."

I've come to realise that beauty is a different kind of burden as you keep growing. When I was younger,it was more of a longing to be conventional & check all the boxes/fit-in kind of a burden.Now,that I'm almost 30...it's more an unapologetic ,rebellious kind of a burden.Eitherway,this whole damn idea of beauty is a burden. This was shot on the sidelines by my wonderful makeup artist Savleen,on the Iphone & completely unedited,which is important in the age of severe retouching .It is fully dedicated to my trainer @vilayathusain - thank you for making me somewhat strong,again. I strive to be the strongest person you have trained,ever. Both mentally & physically.

Masaba Gupta, whose collections Bollywood swears by, launched her line of swimwear recently. Stars like Kareena Kapoor, Sonam Kapoor, Alia Bhatt, Katrina Kaif, Sara Ali Khan and others often step out in Masaba ensembles. The 30-year-old designer was born to Neena Gupta and Vivian Richards, former West Indies cricketer, when they were in a relationship in the Eighties. Masaba and filmmaker Madhu Mantena separated last year and filed for divorce in March.